AMISOM celebrates 61 years of independence together with Nigeria

The African Union Mission in Somalia (AMISOM) joined Nigerians serving in the Horn of Africa to celebrate the 61st anniversary of their country’s independence.

Members of AMISOM Senior Leadership Team led by the Special Representative of the Chairman of the African Union Commission (SRCC) for Somalia, Ambassador Francisco Madeira and District Commissioner of Mogadishu Abdiaziz, Rowdo Cabdi Cali, were also present during the event.

Ambassador Madeira commended Nigeria for being part of. to be AMISOM and also for having played a key role in the liberation struggles of many African countries on their way to independence and for being one of the nations that founded the Organization for African Unity (OAU), which later became the African Union, under the AMISOM operates.

“I take part in this ceremony with pride because Nigeria is one of the founding fathers of the OAU, and since then Nigeria has played a vital role in promoting the ideals of our continent, ”said Ambassador Madeira.

Distributed by APO Group on behalf of the African Union Mission in Somalia.
Media files 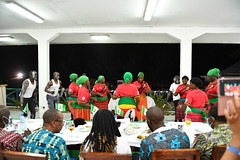 Africanews provides its readers with content from the APO Group as a service, but does not edit the articles it has published.

Build the Empires of the Future in Nigeria Today

The Nigerian and Italian vultures | The Guardian Nigeria News