On a postage-stamp ground where the bowlers mustered few special deliveries and the batters sent most of their messages by air mail, there was one particularly memorable arrival. England eventually romped to victory by 41 runs, but even on a night when Moeen Ali scored England’s fastest ever half-century in the format and Jonny Bairstow flayed his way to 90, the most memorable contribution came from South Africa’s Tristan Stubbs, a 21- year-old playing his first international innings.

Fully 120 of England’s 234 runs came from sixes, their 20 maximums more than they had ever scored before, or South Africa had conceded. With the tourists further dispirited by a series of failures in the field – even discounting the one Heinrich Klaasen lost in his flight and allowed to float over his head, Bairstow was dropped three times – their run chase seemed destined to be forlorn.

But for long periods it was also quite a lot of fun, with Reeza Hendricks scoring a half-century off 28 balls – positively pedestrian in this company – and Stubbs, who instantly found a beautiful seam of form and kept coming up with diamonds, facing the same number of balls and scoring 72. England seemed to have no way of controlling him, and with the second game of the series coming in Cardiff on Thursday they did not have long to produce some fresh ideas. “I’m sure we’re going to have some plans and talk about him tonight,” Moeen said. “Hopefully that won’t happen again this series.”

Four of the first 11 deliveries the debutant faced went for six and his half-century came off only 19 balls, just three more than Moeen’s. For as long as he remained at the crease South Africa had a chance of victory. “During training he’s shown us what he can do so we weren’t really surprised,” Lungi Ngidi said of Stubbs’s display. “He’s a very, very confident chap. We’re happy he got a chance to show the world what he’s capable of.”

But with those present scenting an explosive finale, England’s death bowling proved decisive and after Chris Jordan leaked only four runs from the 18th over and Stubbs fell to the first ball of the next, South Africa’s innings rapidly unraveled. 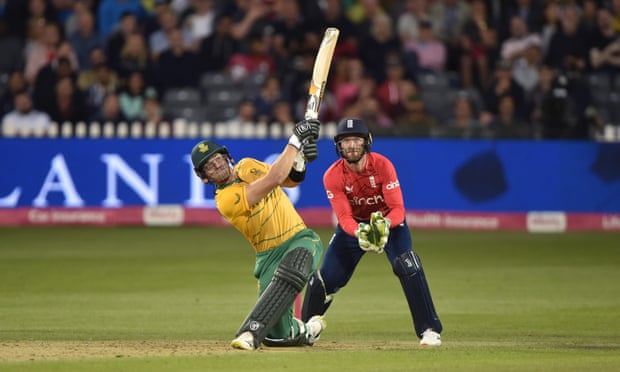 At the toss Jos Buttler had called this “the start proper” of his side’s T20 World Cup campaign, and by the time they next play a 50-over game it will be November and that tournament will be over. It was a toss that Buttler yet again lost – he is now 8-2 down since taking over the captaincy last month, and is on a statistically improbable run of seven successive losses – and David Miller decided it would be wise on this small ground to see precisely how much carnage their opponents could create before his side had to judge the pace of their own innings.

The Spin: sign up and get our weekly cricket email.

The answer in this case was plenty. It took a while for England to really get going, but when they did it was savage – at one point they scored 81 off just four overs as Bairstow and Moeen hit their stride and their opponents lost their bearings.

Bairstow, rewarded for his phenomenal form so far this summer with a roar from the crowd as he made his way to the crease, surfed a wave of form and fortune to reach 90 off 53 before Rilee Rossouw finally held one in the final over. He appeared completely untroubled by the injury to his left knee, which was wrapped in ice as soon as the game concluded. But it was Moeen, who ended with 52 off 18, who nudged England’s total beyond South Africa’s reach.

“It’s a nice size ground for someone like myself who’s not a massive hitter of the ball,” Moeen said. “The record means a lot, because there’s guys in our changing room that score quick and I can brag about having the fastest 50 in T20s. I’ll go into the dressing room and give it big ones in a minute.”

The first hint of the riches on offer for batters came from Buttler, whose stay at the crease was brief but brutal. He faced only seven balls but managed to accumulate 22 runs, with two sixes and a couple of fours, before he misjudged his attempt to hit another maximum off an Ngidi slower ball and Miller took a superb catch at long-off.

England’s other opener had a precisely contrasting experience, Jason Roy laboring to a 15-ball eight full of shanks and mis-hits before top-edging Ngidi to backward point. At home this summer Roy is averaging 17.77 in white-ball cricket and just 9.75 in his four T20 innings, and looks worriedly short of confidence. The ease with which he watched so many others scoring probably did not help.

If Nigeria fails… – The Sun Nigeria