Australia flexed a little early muscle to get their quest for women’s hockey gold off to a flying start with an 8-0 rout of Kenya at the Commonwealth Games.

So dominant were the Hockeyroos that Kenya failed to have a single shot on goal, which was in stark contrast to the Australian outfit’s relentless bombardment.

Australia’s Karri Somerville in action during the Pool B field hockey match against Kenya at the Commonwealth Games.Credit:

The Aussies are desperate to regain their Commonwealth crown, having lost the gold medal match on the Gold Coast in 2018 to New Zealand after a run of three successive Commonwealth triumphs.

Skipper Kaitlin Nobbs finished with a hat trick while Shanea Tonkin had two goals, with Claire Colwill, Stephanie Kershaw and Grace Stewart the other goal scorers.

The world No.3 Australians wasted little time in putting their foot down, with Nobbs capitalizing after being left unmarked in front goal inside the opening three minutes. 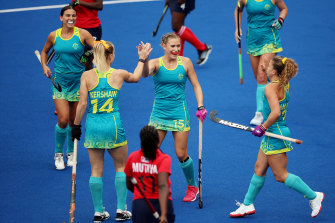 The Hockeyroos celebrate after scoring another goal against Kenya. Credit:

Their lead was doubled less than a minute later when aa scorching Maddy Fitzpatrick-cross from the sideline was deftly guided past the keeper for Tonkin’s first goal.

Hobbs converted on a penalty stroke, and it was 4-0 at the first break when Kershaw found the net after two brilliant saves from the Kenya keeper.

Kenya solidified their defense through the middle after the first period, but costly turnovers continued to propel the Australian attack.

Journalists Detail the Scope of the Abortion Ruling, Monkeypox, and Public Health Powers

Rooting for Kenya and Ferrari: frustrating, but worth it | elections