As summer draws to a close in Cape Town, South Africans take advantage of the empty white-sand beaches in Camps Bay. “I’m happy to be free again, to go to the beach and have fun,” said one lady.

“We were robbed. Even in the heart of summer in December we had a sudden lockdown. We couldn’t get to the beach and enjoy the sea and the fresh air. But this is life. We are very happy that our life is . ” normal again, the economy is opened, “says a man with a wide-brimmed hat.

While many ignore the instruction to wear masks, social distancing is hardly difficult in this public space. Camps Bay is usually a tourist hotspot, but few foreigners came this year because dozen of countries have banned unnecessary travel to and from South Africa to stop the spread of the so-called “South African variant”. The virus mutation known as B.1.351 is believed to be highly contagious. His discovery led the South African government to suspend its proposed launch of the Oxford-AstraZeneca vaccine, as scientists there said it was not effective against the new strain. Instead, South Africa chose the Johnson & Johnson vaccine.

A glimmer of hope for South Africa?

After February, however, the infection rate in South Africa dropped rapidly and remained relatively low with hardly any lockdown restrictions.

Shabi Mahdi, professor of vaccination science at Witwatersrand University, suggests that South Africa’s second wave, which occurred in December, was partly driven by the spread of the new variant B.1.351. The country’s inability to enforce coronavirus restrictions could also contribute to the high number of infections.

“In Europe, tighter restrictions were put in place when the number of cases rose. In South Africa we did the opposite. We started with very high restrictions, and when we couldn’t maintain them we became more lenient and relaxed,” Mahdi told DW.

In the South African province of Western Cape, where Cape Town is the capital, antibody studies show that almost 50% of Cape Town’s population is already infected with COVID-19. In some crowded residential areas, the numbers are even higher. Meanwhile, the excessive death rate suggests that nearly 150,000 people have died from COVID-19 in South Africa. The official number of deaths is just under 53,000.

The virologist Wolfgang Preiser from the University of Stellenbosch says there is so far no evidence that the new variant has caused a higher mortality rate. He adds that there is cause for hope. “Districts in Cape Town that were badly affected during the first wave seem to be less affected during the second wave,” Preiser told DW.

“This is evidence of some protective effect against the new variant if you were infected with the original variant. We think if you had the new virus you would be immune to all of the previous ones. That is the good news.”

Nevertheless, Wolfgang Preiser and his team are already preparing for the third wave by increasing the test capacities. With many people continuing to ignore coronavirus regulations, experts expect infection rates to rise again after the Easter break.

Meanwhile, concerns are growing about a new variant of coronavirus found in a person traveling from Tanzania to Angola. The African Centers for Disease Control (CDC) said the variant had around 40 mutations. CDC head John Nkengasong described it as “certainly one variety of concern”. Nkengasong added that it is difficult to know if current vaccines are effective against the mutation.

“We don’t yet know if you’re putting it in contact with neutralizing antibodies if that actually results in shutdown activity,” he said.

However, tracking the variant can prove difficult as Tanzania has not released data on coronavirus numbers in the country and has not done so since May 2020. Under the leadership of the late President John Magufuli, Tanzania resisted pressure to fight the coronavirus or introduce safety regulations. 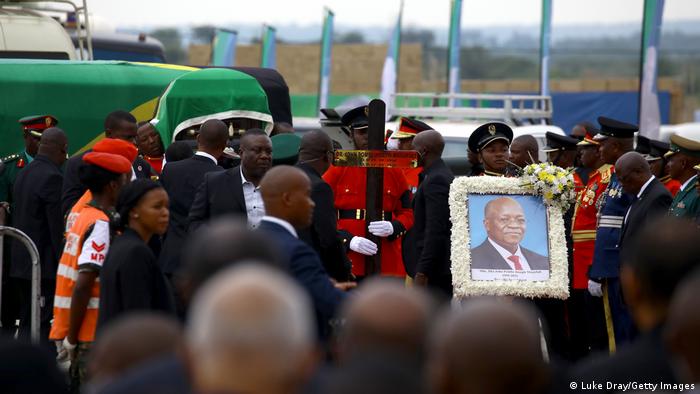 Zimbabwe’s guide points out threats to those who avoid vaccines

Zimbabwe received its third batch of COVID-19 vaccines on Monday, bringing the total dose to over 1,635,000. While the country still doesn’t have enough vaccines for its 15 million people, health experts are concerned about the slow uptake of vaccines. Zimbabwe plans to vaccinate around 10 million by the end of 2021.

Over 103,000 people have been vaccinated since the vaccination program began in mid-February, but over half a million doses remain unused. President Mnangagwa has also indicated that binding policies will be adopted to accelerate a 60% herd immunity target by December 2021.