A group from Davenport West High School is leaving today for a two-and-a-half week trip to Kenya, to provide over 22,000 Africans access to clean water.

The one built in Kenya will be roughly five times the size of the school’s model, bringing clean drinking water to an estimated 22,000-plus people.

The effort mixing engineering education and charitable action was made possible through an ongoing partnership between Davenport West and Davenport-based Fishers of Men Ministries Inc.

Fishers of Men is an international non-profit Christian missionary organization that works to provide water wells, churches, schools, and homes for children and families throughout Kenya. Fishers of Men Ministries hopes to continue to build more water filtration systems for villages in need after the first one is completed.

The current water-filtration project started in 2017, in Smith’s engineering design and development class, and about 100 students have participated, he said Monday.

He and a student went to Kenya in early 2020, working with Joshua Ngao, president of Fishers of Men and a Kenya native.

In 2020, they gathered some preliminary data about the wells, to get an idea how to solve the problem. That trip was also about two weeks.

The semester-long class meets daily for 90 minutes. They remove “bad bacteria” from dirty Mississippi River water, to do a similar process in Kenya.

“I wanted to go to see it working and helping the lives of many other people,” West senior Camden Kiker said. “Here we take water for granted every day.”

Duro Johnson is a senior from Nigeria who’s lived in the Quad Cities about 14 years. He’s never been to Kenya before.

The West class is partnering with Joshua Ngao, a Kenyan native who heads Davenport-based Fishers of Men Ministries.

“It helps get the people in Kenya clean water,” Johnson said.

“The piece we’re trying to solve is E. coli,” Smith said. “We know that with clean water, we can solve most of those problems, those water-borne illnesses.”

“I’m excited to see the project finalized. It’s been going since 2017 and I’ve known about it since last year,” West senior Lily Shaffer said. “It’s been such a long project that it’s gonna be cool to see it finished.”

“Awesome part of the project”

Helping improve people’s lives “is such an awesome part of the project,” Shaffer said. “We take it for granted every day that we have access to clean water and they don’t.” 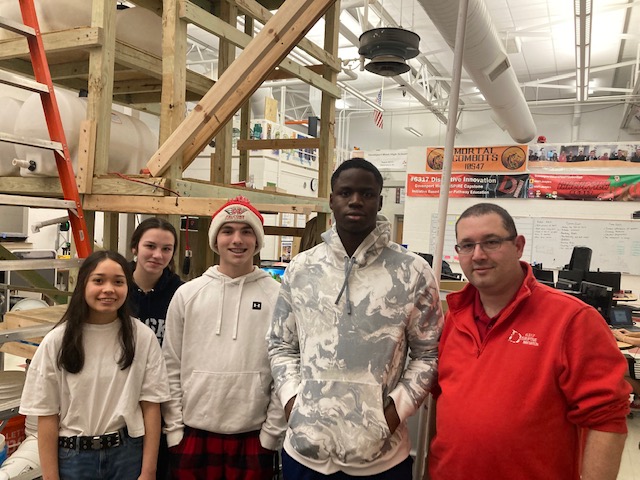 Johnson designed a concrete filtration building, which has been built in Kenya.

“We met with the client, Joshua, and gave us some parameters for what he wanted,” Smith said. “Duro came up with the preliminary design and there was some feedback, back and forth between them. And they started building it, and there was a few modifications we did along the way.”

Ngao went to Kenya last weekend. The group from West will include Lily’s dad and Smith’s wife and two daughters (who are 9 and 11). They will be based in Nairobi and travel to Kitale, Muamba and Kora.

Smith first went to Kenya in 2016 for a different project.

“Being a third world country, a developing country, things are very different,” he said. “In the bigger cities, there’s more modernization. It all depends on where you’re at.”

Mary Anna Le, a sophomore, said: “We spent a lot of time on the project. I’m really excited to share all of our hard work on the project and see the impact it will have on the villagers.”

Smith said he hopes some students will be inspired to pursue engineering or STEM-related careers.

To help pay for the cost of the trip, the students did fundraisers like selling coupon books, spirit wear and Christmas wreaths.

The West group will have three 1,500-liter systems to filter water in Kenya.

For more information on Fishers of Men Ministries, visit its website.