The dispute was filed in August 2014 by the Minister of Foreign Affairs and Investment Promotion of Somalia. [Courtesy]

Legal experts say the aftermath of today’s ruling in the maritime dispute between Kenya can only be resolved through diplomacy and not through court.

Kenyan lawyers who spoke to The Standard say it is likely that the International Court of Justice will end the case by finding that the court has no power to resolve the case.

At the same time, they are of the opinion that the court will either settle the case on the basis of the boycott of Kenya and withdraw it later, or rule on the matter if it does not succeed.

Musalia Mudavadi, Kalonzo Musyoka and Moses Wetang’ula, the leaders of the Kenya Alliance (OKA), stood behind President Uhuru Kenyatta yesterday and urged him not to compromise on Kenyan territory despite the court’s decision.

“Not an inch of the land should be given away. We will stand firm in guarding our territory, and I ask President Uhuru to watch out for any external aggression on our territory, ”he said.

They spoke as experts voiced their fears that Kenya’s tough stance on the court could cause it to bite the butt.

Nairobi University law professor Ben Sihanya believes that even if the ICJ should decide the case, Kenya and Somalia must sit together again and plan the way forward.

He says it is unfortunate that the two neighbors were unable to sit down and negotiate before Somalia decided to go to the Dutch court.

The Kenyan authorities have argued in court that Somalia should have brought in the East African Community first and then switched to the African Union if the dispute escalated instead of taking the case to the International Court of Justice (ICJ) in The Hague, Netherlands.

Kenya’s position was that Somalia had not exhausted all dispute settlement mechanisms before going to a court in The Hague accusing Kenya of bias and ties to the war-torn country.

“Why has Somalia not applied to the African Union for an appeal under the African Union Convention on Cross-Border Cooperation? Wasn’t the Intergovernmental Development Agency (Igad) for Somalia an option to take its case? What about the East African Community? ”Read some of the documents. 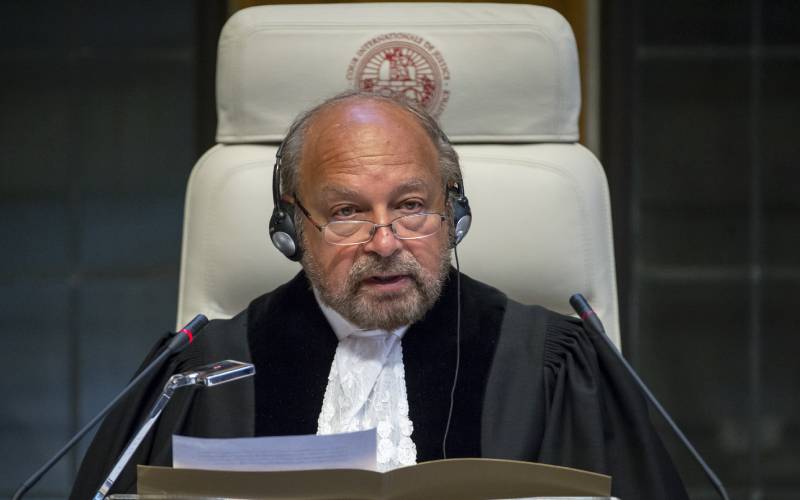 Ronny Abraham, a French national who has been a court judge since 2005, runs the bank. [Courtesy]

“Somalia played the racing card by adopting a Eurocentric legal system as opposed to mediation and arbitration as practiced in traditional African methods of dispute resolution. What would the consequences be if the ICJ favored Somalia over Kenya in the maritime dispute? ”The authors say

Prof. Sihanya says the verdict cannot fit into the shoes of a political or diplomatically negotiated solution.

“I think the court will make its judgment based on its understanding of the law and still hope that we can pursue the diplomatic options and whatever option is, we are neighbors. Whatever the option, in terms of enforcement it will require the two states as well as the UN Security Council and the African Union. ”

“I think there is leeway to pursue political and diplomatic options. Sometimes legal options cannot take the place of politico-diplomatic options. Whatever the outcome, Somalia and Kenya are not moving and we will remain neighbors. Above all, we have to find a way to live together in Somalia, which is politically and technically unstable and, unfortunately, was not persecuted in good time, ”says Sihanya.

Kenya’s marine area is approximately 255,000 km, which was determined in 1979 by latitudes. Somalia recognized Kenya’s claim to the EEZ for 35 years.

However, in 2014, the Horn of Africa country filed a lawsuit with the International Court of Justice. The dispute was filed on August 28, 2014 by Somalia’s Minister for Foreign Affairs and Investment Promotion, Abdirahman Dualeh, on behalf of his government.

The point of contention between Kenya and Somalia is the nature of the line of the sea border.

Somalia claims a center line from the Kenya / Somalia land border, but Kenya insists on a straight line. Somalia’s central line forms a triangle of the marine area currently occupied by Kenya, in which there are four oil blocks.

In 2019, Somalia floated next to the four controversial oil blocks for the auction of minerals in Kenya’s territorial waters.

A document called “Offshore Somalia 2019” leaked by the Somali Ministry of Petroleum and Natural Resources showed that five oil blocks in Lamu are part of those Somalia has given to investors.

It turned out that Somalia had also reached out to companies that had severed ties with it to resume exploration activities. Some expressed their willingness.

The document showed that before the collapse of Somalia in 1991, giant international oil companies (IOCs) had taken over large tracts of their onshore territory, with exploration commencing and 40 oil wells being drilled.

Interestingly, when Somalia officials launched tenders for hydrocarbon exploration in London in February 2019, they were quick to inform bidders that previously collected seismic data was incorrect due to the use of incorrect geological models.

Although Somalia and Kenya had a mutual agreement on the borderline for decades, the former’s authorities filed the dispute with the ICJ just one year after the signing of the agreement by Soma Oil Limited, chaired by former British Conservative Party leader Michael Howard, at the ICJ one nation on Aug. 13, 2013 .

Kenya wants to raise the banks’ reporting threshold for suspicious…