As she sits on the parched, cracked earth that used to be her pasture, Anna Elibit is a woman living on the edge.

Just a few yards from where we are speaking is a scene that looks like something from a horror movie. Dozens of goat carcasses lie in the dust, their rotting forms a testament to intolerable drought that this part of north-western Kenya has endured for more than two years.

“This is the worst drought I have ever witnessed in my lifetime,” the 48 year old tells me.

Along with much of East Africa, the Lake Turkana region has now had four failed rainy seasons, killing hundreds of thousands of animals and pushing millions of people to the brink of starvation.

What is extraordinary about Ms Elibit’s situation, however, is that just a few months earlier she lost hundreds more animals, not to drought but to flooding. 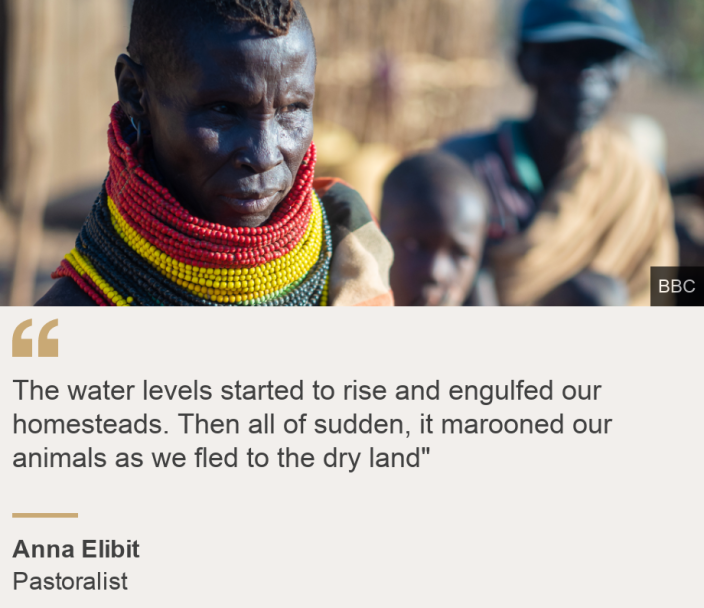 “The water levels started to rise and engulfed our homesteads. Then all of sudden, it marooned our animals as we fled to the dry land””, Source: Anna Elibit, Source description: Pastoralist, Image: Anna Elibit

She used to live along the banks of Lake Turkana, the massive body of water that dominates this part of Kenya, that for the last few years has been expanding, sometimes slowly, sometimes in flash floods that are said to have swept entire villages away.

It is estimated that it has expanded by more than 10% over the last decade, swallowing up around 800 sq km (308 sq miles) of land.

The day the mother of 10 was forced from her home in August 2020 is clearly a painful memory: “The water levels started to rise and engulfed our homesteads. Then all of sudden, it marooned our animals as we fled to the dry land.”

But after they set up home a little further away, disaster hit again: “The water again tracked us and the worst happened. We lost a substantial number of animals to flooding after the grazing area was covered by the raging waters.”

A few miles down the road, passing ragged camps of displaced people, we arrive at the Turkana Basin Institute (TBI). This scientific research campus is world-renowned for its work understanding the origins of our species. Fossils and remains discovered here have helped establish this area as the place all our of common ancestors emerged from.

But for Dr Dino Martins, the centre’s new director, the more pressing issues are now connected not to humanity’s past, but its future, as he predicts another unprecedented season of failed rains.

“It might even fail again next year, which will have pushed people to the point of complete collapse.”

An area being hit by simultaneous flooding and droughts may seem contradictory, but it is the result of the greater fluctuations in weather systems that virtually all scientists say is the result of man-made climate change.

A couple of years ago a weather system called the Indian Ocean Dipole caused record rains to fall over East Africa. As well as causing misery at the time, they also saturated the lands that feed into the great lakes of Kenya’s Rift Valley, including Lake Turkana.

Those two extreme wet years have now been followed by these unprecedented droughts. Dr Martins says that while the damage is caused by global factors, local actions have made a bad situation worse.

“What’s happening here is an ecosystem that’s undergoing change due to these extremes. A few years ago we had more rainfall than we’ve had in decades. That rain would normally filter through the ecosystem slowly, but that is changing because of environmental degradation.”

Deforestation in the highlands has meant that water runs through the system much faster to fill Lake Turkana. Add to that the overgrazing blamed on an explosion in goat and sheep populations, and Turkana faces a perfect storm.

The effects can be seen etched on to the faces of those we meet at a malnutrition hospital in the nearby Kakuma camp. The sprawling city of tents and huts is home to around 200,000 people, most of them refugees from conflicts in neighboring countries. The center is run by the International Rescue Committee and treats hundreds of babies, most in a dire state. 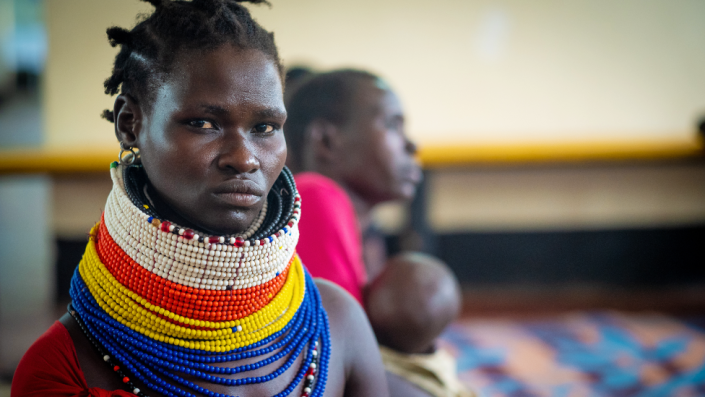 Paulina Lomojong feeds her son Isuuwat with specially formulated milk – silent tears stream down his face. His situation has improved, but he still looks much smaller than he should for 13 months.

“Food prices have skyrocketed,” says Mrs Lomojong, who lives in a village just outside the camp. “One kilogram of maize flour is 120 Kenyan shillings [$1; £0.90], but when you cook it’s not enough for the family. Some of us go to sleep hungry.”

But food shortages are not the only way in which the drought has affected her family; scarcity causes conflict and last April it cost her husband his life.

“My husband crossed into South Sudan in search of pasture for his animals. There was a raid in which he was killed, leaving me a widow. The community there raid each during drought season to restock their lost animals.”

Vincent Opina, who runs the centre, predicts worse things to come: “What we project is an increase in admissions of children with malnutrition in the ward. We also see people around here facing real famine and starvation… If nothing is done, we are likely to lose many children.”

Food crises in Turkana are not a new phenomenon. Indeed, there has been an emergency food response in this region for decades. It has led to criticism, including from Dr Martins, that radical change is required.

“We need to make that breakthrough in our thinking that this landscape is not just a place to send food aid to but a place that can take responsibility for its own food production.

“It gets worse each year… more and more food aid is being supplied, but that’s not a sustainable way.” 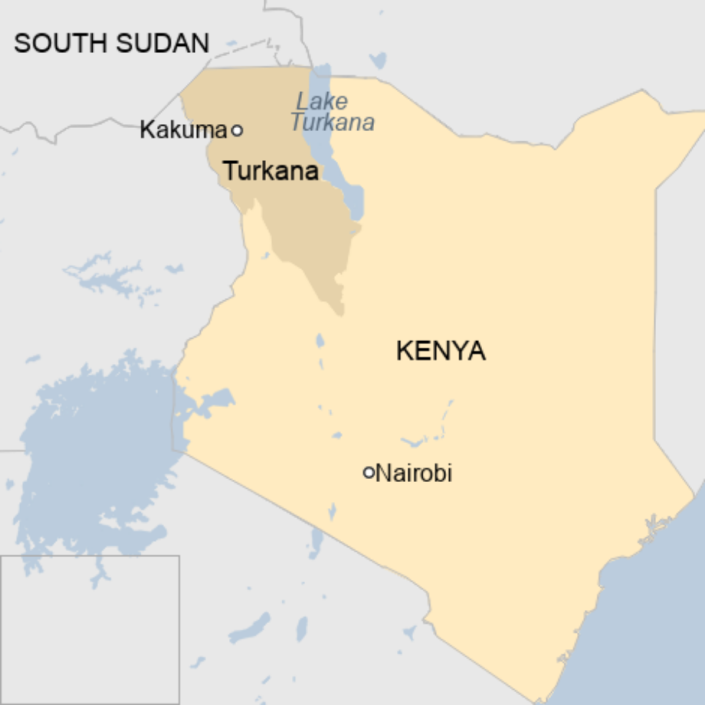 He takes me to the institute’s hydroponics garden. It appears more basic than the name suggests, with rows upon row of beige pipes embedded in the ground, leaves coming out of them giving the appearance of a semi-organic tree.

This system of efficient, low-cost irrigation was initially set up to feed the people who live and work at the TBI, but Dr Martins think it could also help alleviate many of the problems the region faces.

“In an ideal world, we would see these springing up all over Turkana, making use of the abundant water resources that are there in the ground in the rivers, and sustainably producing food in a way that gives people dignity.”

Not just dignity, but a chance at a future as well. Dr Martins tells me there are very real debates taking place about whether this landscape, and the pastoralist way of life it has supported for millennia, will be able to survive this current crisis.

Back at Ms Elibit’s homestead, she has been having the same thoughts: “Starvation is starring at us.

“We have nothing to depend upon after our animals were killed by drought. I don’t think whether my life will ever return to normal again.”