Egyptian authorities are demolishing a historic 19th-century neighborhood in Cairo to make way for high-end housing and business development a stone’s throw from the Nile, angering residents who say they have not been properly compensated.

The Maspero neighborhood is named for French Egyptologist Gaston Maspero, who helped found the Egyptian Museum. Developers have long eyed the central district, which is already home to the Foreign Ministry and the state television and radio building.

The neighborhood is part of the modern city built by Khedive Ismail in the 19th century, which was envisioned as a Paris on the Nile, with wide boulevards, traffic circles and stately European-style architecture.

In recent decades the neighborhood, like much of the Egyptian capital, has fallen into decay. While some of the old architecture remains, including apartments inhabited by middle-class families, parts of Maspero had come to resemble a shanty town.

Heavy machinery is used to demolish buildings in the Maspero neighborhood of Cairo, Egypt, July 31, 2018. Egyptian authorities are demolishing the neighborhood to make way for development, angering residents who say they have not been properly compensated.

Authorities spent years persuading residents and shopkeepers to leave the area in exchange for compensation or temporary accommodation elsewhere, with the promise of moving back to the neighborhood once modern housing had been built.

Of the 4,500 families displaced by the demolition, about 900 will return to live in Maspero in apartments that will stand alongside glitzy residential towers and high-rise office buildings.

The redevelopment is part of a larger effort to transform Cairo, which is home to 20 million people, even as a new administrative capital is under construction in the desert 45 kilometers (30 miles) to the east.

Authorities say the projects are needed to reduce the overcrowding, traffic and pollution that have long plagued the city. But critics say poor and middle-class Egyptians are being pushed out by well-connected businessmen.

The government has set its sights on two Nile islands that are home to poor neighborhoods and farming communities, hoping to transform them into luxury housing and business districts. Police serving eviction notices have repeatedly been clashed with residents.

Last week, Cairo’s governor said Maspero was completely evacuated, paving the way for the final phase of demolition. “Building houses for those [900] families will be the first phase of the project,” Governor Atef Abdel-Hameed said.

The entire process will cost an estimated $225 million, according to the Housing Ministry.

Among the casualties of the new development is the Hinhayat watch shop, which was established in 1907 by a Bulgarian craftsman. 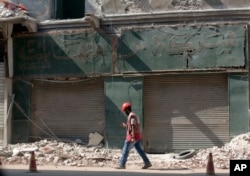 A worker walks past the Hinhayat watch shop, which was established in 1907 by a Bulgarian craftsman, that is being removed in the Maspero neighborhood of Cairo, Egypt, Aug. 11, 2018.

Essam Ahmed, the owner, says his grandfather worked in the shop and then purchased it in 1956, when Egypt’s foreign communities fled in the face of growing nationalism and expropriation of property by the socialist government. He boasts that his grandfather once fixed watches belonging to King Farouk, Egypt’s last monarch, as well as politicians and celebrities.

“Here is the legacy of this shop,” he said, as he packed away the last of his watches and clocks earlier this month. “I wanted to save this heritage for the country … but it seems that they [the government] are not interested. There are some things which are more important than money.”

Ahmed has sued the government, saying the shop should have been spared demolition because of its historic value. He said authorities told him he would be compensated only if he dropped his cases.

He and other nearby shop owners say the compensation offered by the government for their businesses — 7,000 pounds ($391) per square meter — if well short of market value in the area.

“Their compensation, which we have not received yet, is worthless,” said Ahmed. “Our livelihood is gone.”

The government insists the compensation offered is fair and denies it is forcibly relocating anyone.

Ahmed el-Sayed, a retired 63-year-old, moved from Maspero months ago. He says the now-demolished apartment building where he lived most of his life was a unique architectural landmark registered with the Ministry of Culture.

“It should not have been demolished. It should have been renovated,” he said.