CAIRO, Egypt (AFP) – Egypt put Mohamed Aboutrika, one of the most successful African soccer players of his generation, on the terror watch list for suspected of funding the banned Muslim Brotherhood, his lawyer said Tuesday.

The brotherhood was banned in 2013, months after the army toppled Islamist President Mohammed Morsi, who was from the movement.

A court official said Tuesday that Aboutrika was one of more than 1,500 people, including Morsi and other members of the Muslim Brotherhood behind bars, who were watchlisted last week.

In 2015, two years after his retirement, a government committee frozen the assets of the former player from Cairo-based club Al Ahly and the Egyptian national team.

Egyptian President Abdel Fattah el-Sissi listens to US Secretary of State John Kerry during a meeting at the Presidential Palace in Cairo on May 18, 2016. (Amr Nabil / Pool / AFP)

Under an anti-terror law passed by President Abdel Fattah el-Sissi in 2015, anyone on the country’s terrorist list is subject to a travel ban, whose passport and assets may be frozen.

Aboutrika helped Egypt with repeated wins at the African Cup and played against Al Ahly teams in the African Champions League.

Morsi became Egypt’s first democratically elected president, only for the army, which was prompted by large protests against the Islamists to oust him a year later and take action against his supporters.

Aboutrika’s attorney Mohamed Osman said the court’s decision to put him on the terror watch list “is against the law”. The retired player was “not convicted or officially informed of any of the charges brought against him.”

“We will appeal this decision,” he said, adding that “if he is included on the list it will have many legal ramifications, particularly the travel ban.”

The property freeze on Aboutrika remains in effect despite two court orders to lift the property, Osman added.

In an interview with the state newspaper Al-Ahram in May 2015, Aboutrika denied that his company – or one of its partners – had ever financed the Islamist movement.

Aboutrika is currently in Qatar working as a commentator for the BeIN sports channel, Osman told AFP on Wednesday.

The soccer player’s fans used social media to express their anger at the verdict and tweeted using the Arabic hashtag #Aboutrika_is_not_a_terrorist.

Former Egypt international and Tottenham Hotspur striker Ahmed “Mido” Hossam called on authorities to investigate whether they had evidence that Aboutrika was linked to terrorism.

“Until then we will all keep defending him and I will continue to support him,” he tweeted. “I doubt that a man of his character can do anything against Egypt.” 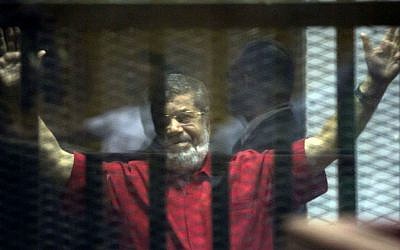 Since Morsi’s fall, police crackdown on the Brotherhood has left hundreds of deaths and thousands of prisoners.

Militants, mainly jihadists from the Islamic State Group in the Sinai Peninsula, killed hundreds of police officers and soldiers in attacks.

The Brotherhood, which campaigned for change through elections, denies involvement in the violence, but analysts believe parts of the group turned to the attack on the police.

Aboutrika retired in 2013 and the 38-year-old has since avoided expressing his political views in public.

I am proud to work at The Times of Israel

I’m telling you the truth: life here in Israel is not always easy. But it’s full of beauty and meaning.

I am proud to work with colleagues at The Times of Israel who put their hearts into their work day in and day out to capture the complexities of this extraordinary place.

I believe our reporting sets an important tone of honesty and decency that is essential to understanding what is really going on in Israel. It takes a lot of time, commitment and hard work from our team to get this right.

Your support through membership in The Fellowship of the Times of Israelallows us to continue our work. Would you join our community today?

Join the Times of Israel Community Join our Community Already a member? Log in to no longer see this

You are serious We appreciate that!

We are very happy that you have read X. Times of Israel article last month.

That is why we come to work every day to provide indispensable coverage of Israel and the Jewish world for discerning readers like you.

So now we have a request. Unlike other news agencies, we haven’t set up a paywall. Since the journalism we do is expensive, we invite readers who The Times of Israel has become important to to join our work in support of our work The Fellowship of the Times of Israel.