JThe photographer OHNNY MILLER began taking drone photos of South African cities in 2016. Photos from Cape Town, Durban and Johannesburg show neighboring districts – but different worlds. A leafy suburb with azure swimming pools could be seen on one side of a photo; on the other a slum with densely packed huts.

Listen to this story

Your browser does not support the

Enjoy more audio and podcasts on iOS or Android.

Economic research on South African inequality has produced a less granular picture. Reports from the World Bank and other bodies use benchmark measures of income inequality, such as the Gini coefficient, to conclude that South Africa is one of the most inequality countries in the world. But they often say little about wealth, the role of government policy or, most importantly, what has happened to the black-white divide since apartheid ended in 1994.

Two recent works by the scientists Aroop Chatterjee, Léo Czajka and Amory Gethin fill some of these holes. In doing so, they offer perhaps the most detailed picture of the haves and the dispossessed in South Africa in the democratic age. Research is critical to understanding the deep discontent of many South Africans.

In their latest paper, the economists combine household surveys, tax data, and national accounts to track incomes from 1993 to 2019. First, you notice that the top 10% of pre-tax earners have increased their pre-tax income share from 57% to 66% – values ​​higher than any other comparable country. The median income of the top 1% rose by 50%, while that of the poorest half fell by more than 30% due to inflation. Even after taking taxes and transfers into account, the share of income in the top 1% is roughly the same as at the end of apartheid – almost a fifth.

Since 1994, the ruling African National Congress (ANC) has raised taxes and introduced welfare benefits for retirees and children. It has expanded public health care and education, which researchers count as “income in kind” for beneficiaries. On paper, these transfers largely offset the loss of pre-tax income of the poorest half of South Africans.

However, it would be wrong to believe that social policy has pushed back the tide of inequality. First, the authors state that regressive consumption taxes like VAT mean high effective tax rates for the poorest. The child benefit allowance is not enough to buy nutritious food. Unemployment benefits are poor and patchy; hence the growing campaign by NGOs for a universal basic income. The researchers-defined “income” that the poor receive from public services is not equivalent to a paycheck. And given the poor quality of schools and hospitals, it may be less valued by South Africans than by the study’s authors.

One seemingly positive trend that economists have identified is the narrowing of the underlying racial income gap. In the 1990s, whites earned about seven times more than blacks. By the late 2010s, they were doing about four times more.

But this narrowing is “mainly due to the emergence of a new black elite,” the paper says. Once in government, the ANC introduced affirmative action laws that have helped increase the percentage of well-paid black jobs, particularly in the public sector, where unions have raised wages above inflation. Another policy known as “Black Economic Empowerment” has steered business towards black companies and enriched a small number of black investors.

The proportion of blacks among the top 10% of the workforce has risen sharply, also as a result of such a policy (see Figure 1), but is still below their proportion of the total population (81%). Poor black people did less well. While the gross income of the top 10% of black earners has tripled, that of the bottom 50% has fallen (see chart 2). When the researchers looked only at the ratio of white incomes to the bottom 90% of black incomes, the racial gap had widened slightly since apartheid. 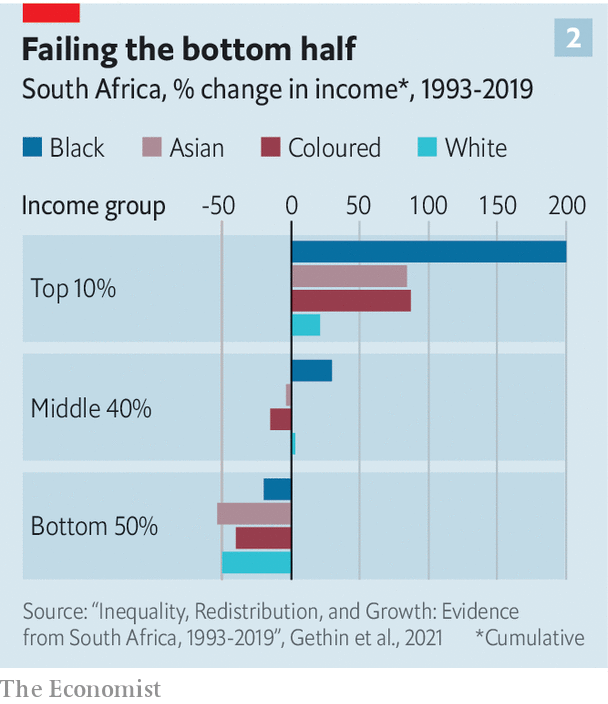 Previous work by the same authors found similar trends. It found that the concentration of wealth in South Africa is greater than any other country for which comparable estimates are available. The 3,500 households of the top 0.01% have more net wealth than the bottom 90% combined. The wealth share of the top 10% is roughly the same as at the end of apartheid; the proportion of the top 1% and 0.01% has increased, if at all.

Much of the present inequalities stem from the white supremacist past, when blacks were systematically denied a good education and prevented from acquiring wealth. Today whites are, on average, eight times richer than blacks – an overall gap that is twice as large as that in income. Heredity, notes Mr. Gethin, helps keep old inequalities.

Taken together, the two papers not only underscore the legacy of white rule, but also the ANC’s failure to help most black South Africans overcome it. Redistribution and empowerment of the elite are no substitutes for growth and jobs. Unemployment, as the work of Murray Leibbrandt of the University of Cape Town has repeatedly noted, is at the heart of South African inequality. South Africa’s GDP per capita has been falling since 2015 – a consequence of corruption and bad politics. In the second quarter of 2021, unemployment hit a record 34.4%.

Local elections will be held in South Africa on November 1st. For the first time, the ANC can win less than half of the votes in a national competition. When that happens, it will be easy to point out the party’s dysfunction or a surge in voter turnout following the July riots. But there are deeper forces at play. Nelson Mandela’s party promised “a better life for all”. So far it has given some much better lives. ■

KHN’s ‘What the Health?’: The Autumn of Democrats’ Discontent