Ghana continued their hunt for group leader South Africa when the Black Stars beat Zimbabwe 3-1 on Saturday, falling one point behind the group leader.

Bafana Bafana was hoping the Black Stars would lose points against the Warriors to extend their lead over the West Africans who had other ideas for the game.

With the result, the Black Stars are six points just one point behind South Africa, which had won its away game the previous Saturday to maintain its place at the top of the group.

South Africa consolidated their top position in Group G during Africa World Cup qualifiers with an impressive 3-1 win over Ethiopia.

Getaneh Kebede equalized for the hosts at the start of the second half, but Mothobi Mvala gave South Africa a lead with 19 minutes remaining.

Substitute Evidence Makgopa secured victory for the guests in the 91st minute.

Hugo Broos’ team, which did not make it to the Africa Cup, is top of the group with seven points.

Below is the group. 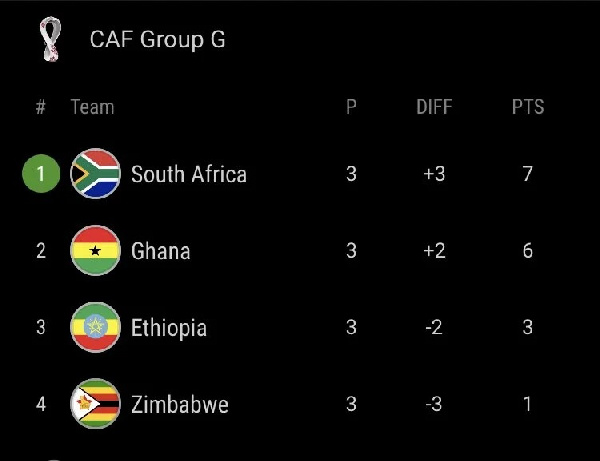