Inside one of Kenya’s most luxurious safari itineraries

When I talked to Leslie Lefkowitz, a luxury communications expert about one of the outfits in her stable, she was emphatic: “It is ROAR AFRICA… in all capital letters.” There was no illusion as to why this is perhaps one of the most luxurious tour outfits in the world with a focus on African hospitality.

Some of the company’s exclusive adventures are in Kenya, and they come at a cost too. For example, a 10-day safari and accommodation in some of Kenya’s bespoke hospitality outlets cost each guest (the safari takes up to six people) $32,660, or Sh3.9 million at current exchange rates.

A casual glance at the company’s website gives a glimpse into some of the notable personalities who have roared their way into the African plains in search of tranquility.

There is Vanessa Williams, the American singer, actress, and fashion designer, who, after an epic safari recommended that “everyone experience the unique treasures of Africa at least once in their lifetime.” Pat Mitchell, a media personality and former president of CNN productions said she “returned home a different person” after an epic tour of Africa.

Yet, there is one name on the guest list that rings a bell as far as Kenya’s position as a top holiday destination is concerned. Robert Redford is the renowned actor behind the all-time classic, Out of Africa which he co-starred with Meryl Streep, and that detailed the love—and many heartbreaks—that Danish author Karen Blixen endured.

In fact, ROAR AFRICA’s Kenya itinerary follows the movies’ footprints, with guests revisiting key locations where some of the romantic scenes were shot.

“The safari is inspired by one of the greatest movies of all time,” says Lefkowitz. “This journey could only take place in Kenya, as it brings the romance of the cinematic masterpiece to life by recreating the beloved film’s most magical moments in the very places in which they were first filmed. Guests can channel their inner Meryl Streep or Robert Redford and experience this extraordinary destination as no one ever has before.” 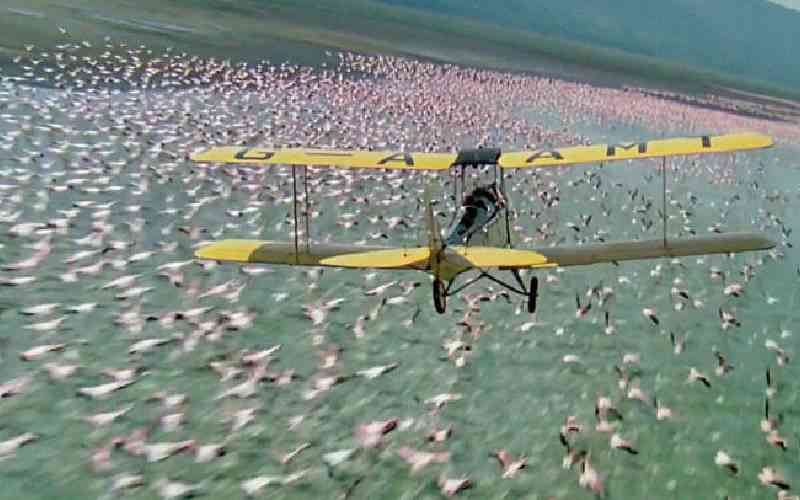 Before an air transfer to the bush, it helps to spend at least two nights in the city, and Hemingway’s Nairobi, the plantation-style, five-star hotel situated in the leafy and historic suburb of Karen and not far from where parts of the movie were shot is the place to while the nights away.

From the balcony of the hotel, the knuckle-topped Ngong Hills come into view. On the slopes lay the final resting place of Denys Finch-Hatton, Karen’s second lover who perished in a plane crash at Voi in May 1931.

For the next four nights, the Out of Africa set continuous in yet another location where Finch-Hatton’s ‘burial’, as per the movie, was recorded. On this site, high on the western ledge of the Great Rift Valley now lies Angama Mara, aptly named for seemingly suspended in mid-air, or the place where heaven and earth collide.

Here Redford and Streep had unforgettable views across the endless Mara plains. A short distance, toward the Mara River, is the spot where the intimate ‘hair washing’ scene in the movie was shot.

The showstopper, though, reads in the vast expanse of Laikipia. Segera Retreat, located in between the Great Rift Valley and Mount Kenya, is set on an exclusive, 20,000-hectare private wildlife sanctuary owned by conservationist and businessman Jochen Zeitz.

It is here at Segera where a hangar on the property’s grounds houses the original G-AAMY biplane used in the 1985 movie. The quaint plane is still in good condition and guests can take a flight on this piece of history at an additional cost.

These ultra-luxurious itineraries are the creation of Zimbabwe-born entrepreneur, Deborah Calmeyer, who founded the company in 2005. Shuttling between New York and Cape Town gave her an unmatched understanding of the needs and desires of travelers who were not just looking at their pockets but the serenity of specially-curated destinations.

“Deborah is inquisitive and cultured, with her finger on the pulse,” she states in her work profile. Her tours are more than just sightseeing endeavors. It is about food, culture, and the arts.

Deborah grew up on a farm in Zimbabwe, riding horses and playing with families of ‘Carmel’, the pet lioness that her father had rescued. Her family spent a lot of time in the African bush, inculcating in Deborah a deep commitment to the preservation and support of her people, animals, and the fragile environment in which they lived.

Her company is primarily run by women, with a supportive cast of local guides and other experts from Africa. Hers was a deliberate move to involve women in tourism as they are the ones who suffer the most from a fragile ecosystem. Women, she says, were in the hotel kitchens, housekeeping, or reservations desk, rarely sitting equally on the high table with men. “If African women rise, wildlife will thrive” has become the driving force for change in the industry previously dominated by men.

Magoha Wants Adult videos Banned in Kenya, Detrimental to Learners: “They Must…

Entergalactic’s Kenya Barris on Creating Something Unique with Kid Cudi