February 3, 1996 is a date engraved in the history of sports in South Africa – it is the day that Bafana Bafana won the African Cup of Nations for the first time.

A quarter of a century later, that win remains her only tournament win, despite the country’s status as a continental superpower.

The South African football community is increasingly reminiscent of Saturday 25 years ago when substitute Mark Williams scored twice against Tunisia in the second half in Soccer City.

His goals sparked frenzied home celebrations at the end of a tournament South Africa hastily put together after Kenya was stripped as host.

Their path to victory had been eased somewhat by Nigeria’s withdrawal on the eve of the tournament due to a diplomatic spat with South Africa after Nelson Mandela criticized the judicial assassination of Ken Saro-Wiwa by the Sani Abacha regime.

Nigeria owned it and its strong team would win gold medal at the Atlanta Olympics later that year, but winning coach Clive Barker said his Bafana Bafana team was “the right team in the right place and at the right time”.

They started the tournament in menacing style with a 3-0 win over Cameroon and played the game of their career to beat Ghana in the semi-finals by the same score.

The consecration of South Africa as champions – on the first attempt in the final – against Tunisia was an emotional affair, underscored by a beaming Nelson Mandela, who pumped his fists with joy as he stood on the presentation podium in a South African team jersey. 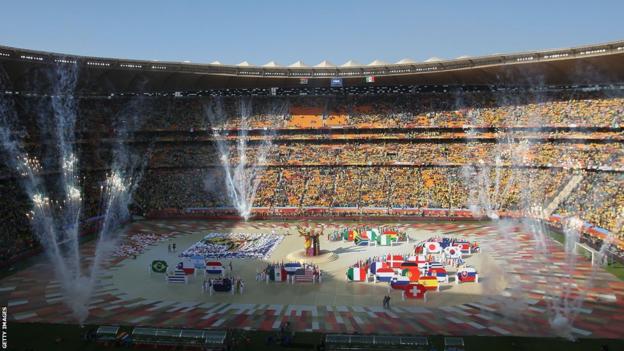 The opening ceremony of the 2010 World Cup in South Africa

While South Africa has since participated in nine consecutive Nations Cup tournaments, it wasn’t until two years later that it was the final in Burkina Faso.

Hosting the 2010 World Cup brought the country a massive boost in infrastructure, but every hoped for improvement in the field never materialized.

On the anniversary of their Nations Cup victory, Bafana Bafana is the 13th best team in Africa and, according to the latest FIFA rankings, 71st in the overall standings.

When they won the 96 Nations Cup, they rose to 19th place in the world and have never been this high in the rankings since.

Much of the glamor on the team is gone, and as a result, commercial connections are harder to find.

Sponsors used to queue up to join the team, but now the South African Football Association needs to enter into swaps and get municipalities to pay the cost of hosting their games.

The last time the team played in front of an audience – before the Covid-19 pandemic – was in November 2019 at Soweto’s Orlando Stadium, a qualifier for the Nations Cup against Sudan, which was attended by just over 10,000 spectators. 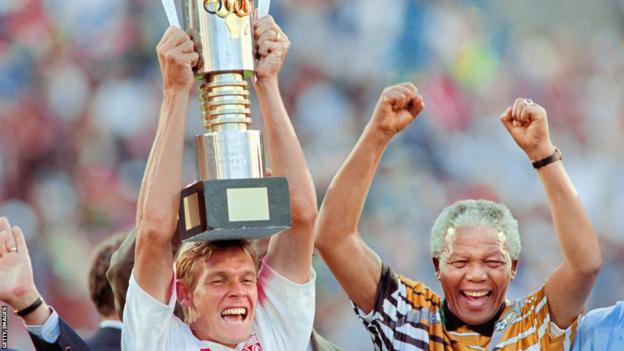 Why Bafana Bafana failed to repeat her title win performance is a question that is puzzling, especially given the facilities South Africa has compared to most other countries on the continent.

“There have been some good teams and some good players since then, but I think we were mentally strong. We were all captains on the field, we knew our responsibilities,” he told BBC Sport Africa

In 2000, the South African U23 team scored a shock victory against Brazil at the Sydney Olympics.

But it never happened what Stanton Fredericks, a prominent member of this generation who played in Greece, Switzerland and Russia, says “haunts me”

“The association has some of the blame for their inconsistent structures. They never had a plan to filter us into the senior team and there was no succession plan,” said Fredericks, now a television analyst.

“But the 1996 team was a special, naturally gifted team. We were a nation that hungered for success back then.”

“You can do it through a tournament … look at Senegal at the 2002 World Cup. But after that it fell flat.

“You can’t cheat in football. This is where the basics come in and if you don’t master the basics, you can only reach limits.” 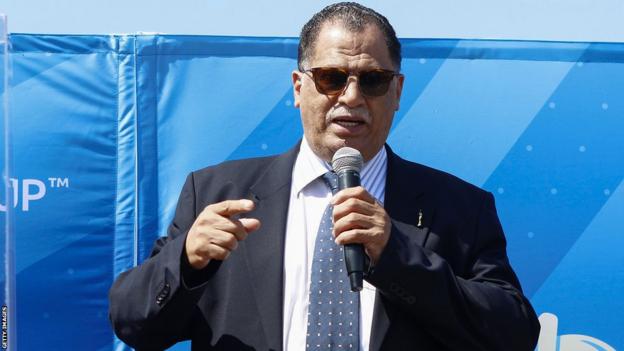 For the President of the South African Football Association, Danny Jordaan, who has held various roles in the organization since 1992, it is important to have more players in clubs outside of South Africa.

“You can only make a Bafana team compete effectively on the continent if the mainstream talent flow into the team is battle-hardened Champions League players,” he said.

“We need players who come into the team and have already won significant international matches at junior level.”

He says the elimination of hosts Egypt at the last Nations Cup showed that there is some potential.

“It was a big disappointment for them, but a wonderful moment for South Africa. It was a very emotional and intense game, but a great success,” he said.

“But good teams win every now and then, but great teams always win, and that’s what we want.”