Placing an arrow in his bowstring, a Samburu warrior focuses intently on the target ahead. As he prepares to take aim, rays of golden evening light glint from the silver discs dangling from his brow and a crown of colorful pompoms jiggles in the breeze.

Released with a twang, the arrow sings as it soars skyward, eliciting roars of applause when it then hits a ball of elephant dung on the ground.

Samburu’s circumcised warriors are a revered group within their communities. Considered almost superhuman during this rite of passage, should they die their bodies can never be buried, but are left in the bush for a hyena to devour.

Honing survival skills is a daily practice: spear throwing, sprints and rungu (baton) chucking are all games that these warriors have played since childhood. But today looking good is also part of the competition. Preening like peacocks, the men proudly parade their paper mohicans, beaded headdresses and nipples scarred from flame-heated metal blades. Knee-length striped socks, inspired by a fervent football craze, are a nod to modern trends. Neither staged nor contrived, this is one of the ancient rituals of Samburu life that I witnessed as a guest at Kalepo Camp, a safari lodge that puts community firmly at the forefront. Settled by former nomadic herders whose ancestors migrated from South Sudan 300 years ago, the 390,000-acre Kalepo Conservancy sits below the cedar-studded slopes of the Matthews Range that rises from the scrubby ocher soils of northern Kenya. Isolated and remote, it is near-impossible to reach from Nairobi, with a lack of roads through the Great Rift Valley, and it is best reached by private charter plane.

“In the north you get that wonderful sense of wilderness where it feels like time has stood still,” says the camp’s owner, Rob Mason, who surveyed the area with his wife, Storm, after hearing that the conservancy — comprising a committee of local villagers — was seeking investors. Driving along the dry Kikwar riverbed (the only two roads in Kalepo have since been built with a tractor), he found a bend “that got me”. A night camping beneath a sprawling fig tree opposite the sacred Kimaning Mountain convinced the unconventional South African couple that it was the right thing to do.

Perched above one of the conservancy’s main waterways, which flows for three months of the year, the exclusive-use camp is a shaded oasis surrounded by riverine bush. Sandy paths through leafy tunnels link five secluded tents whose flaps open on four sides to let in the cool air and amber light — as well as the occasional warthog. 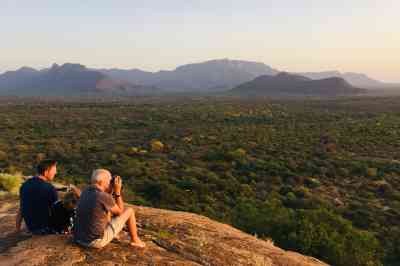 Beneath the spiraling vine of a woolly caper bush, my tent (No 2) has a private outdoor metal bathtub and a hammock, where I lie listening to a breeze ripple over mountains that have been traversed by pastoralists — nomadic herders of cattle and goats — for aeons.

In a communal area a small swimming pool faces a watering hole visited by dozens of baboons and elephants at a time; a private “beach” serves as a lawn for petanque and a lounge is stocked with more varieties of spirits than many Mayfair bars. Eschewing architects and interior designers, the couple built the camp alone; the furniture was made by a local carpenter — yet there’s nothing lo-fi about the place. 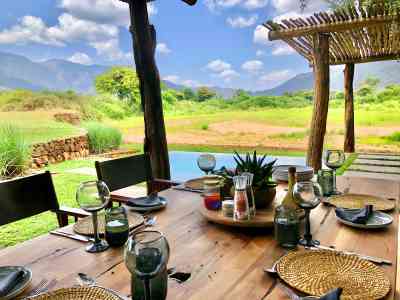 Poolside dining at the camp

“We’ve tried to push the envelope of luxury but keep a bush camp feeling,” Rob explains during a sunset walk along the riverbed, while his seven-year-old son, Angus — an Attenborough in the making — points out spots where elephants have attempted to dig wells.

Water was an especially important factor in selecting a site for the camp as northern Kenya is experiencing its worst drought in 40 years. Helped by the local knowledge of elders and a professional water diviner, the couple struck liquid gold, finding an underground source that has been tested and officially declared safe to drink. They have built four wells for the community and regularly fill a waterhole for wildlife. “It goes some way to justifying the water we use in camp,” Rob says.

Our walk ends in a clearing where two blacksmiths are fanning a fire with bellows made from goatskin, so they can melt aluminum pans to make bracelets. These loop the branches of an acacia tree — although a machete and circumcision knife are less appealing souvenirs.

The encounter provides yet another opportunity to learn about the complexities of Samburu culture. Rob explains that a caste system relegates a blacksmith to the lowest social rung and, as such, his sons are always first up for circumcisions with newly crafted blades — an insurance measure for everyone else.

Far from being a game-driven destination, Kalepo focuses on communities living in harmony with nature, making it refreshingly different to so much else on offer in the bush.

“We’ve loved the adventure so far, but it hasn’t been easy,” Storm says later that evening, handing me a mescal margarita before we sit down to a dinner of Yotam Ottolenghi-inspired dishes made with leaves from the camp’s desert garden. 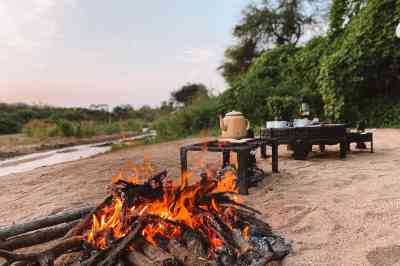 Storm, as her name might suggest, is a force of nature, balancing her time between entertaining guests, training a staff of Samburu warriors from scratch and rushing to treat ailing mothers and children with creams and tablets from a £900-a-month medicine stock funded by the couple. But even she admits that there are days when things are “very, very hard”.

Beyond complicated operational logistics, cultural considerations have posed the biggest challenge. A rule preventing warriors from eating in the presence of women has restricted employment opportunities, while teething problems resulted in a high turnover of staff in the early days of the camp. Opening during the Covid pandemic also stalled progress.

Plowing every penny they own into Kalepo, Rob and Storm have no budget for big press or marketing campaigns — although word of mouth has already attracted back-to-back bookings from wealthy guests, including Bette Midler and Lewis Hamilton.

Eager to share their culture, the Samburu people have also welcomed outsiders into their homes.

One morning a staff member, Emmanuelle Lesampei, invites me to his village. Inside the boma, an enclosure that keeps both humans and livestock safe, five domed huts made from branches and sansevieria thatch are covered in a woven patchwork of old T-shirts and trousers. Each hat belongs to a wife of Emmanuelle’s father — the community elder Tembea Lesampei.

Forced further afield by the drought, most warriors are, Emmanuelle explains, in the mountains herding cattle, leaving women and children to milk the goats.

Next door is a house belonging to the “queen of the village”, Tembea’s eldest wife, outside which forked sticks denote the number of circumcised males she has raised. Inside the dark hut, smoke coils from a fire — the symbol of a good wife — and several milk gourds are scattered on the floor. Sitting on a mattress of goat hides I listen to Emmanuelle run through the various headrests used for different levels of society — but as far as pillow menus go, these curved wooden versions look pretty uncomfortable to me.

When the smoke gets too much we leave and continue to the singing wells, where Samburu chant to their cows while fetching pails of water from a hollow dug into a lugga (a seasonal watercourse). Deeper than usual as a result of low rainfall, they have to work harder, and the songs I hear have the tone of a lament.

If the December rains fail, famine is a looming reality, and a need for additional income is even greater than ever. Signing a 30-year lease with the community entails commitment, and the Masons are aware that there is pressure to deliver. Conservancy fees of £130 per day are the highest in the north, but much more is needed to sustain the trust of an 8,500-person population. “Ultimately we want the community to be self-governing and self-sustaining,” Rob says when I join him for a sunrise bike ride through a valley decorated with pink desert roses and the brilliant flashes of a golden-breasted starling’s wings. “If we can create a situation where people continue to utilize and live in the landscape while maximizing the wildlife potential, then everybody wins.” There are plans to raise funding for a medical clinic in a nearby village, discussions about planting agave plants as alternative animal fodder and ambitious ideas to set up a fly camp in a mountaintop cycad forest as a further revenue stream.

On our way back Rob points out a cow with the skin of a recently slaughtered goat around its neck, a sacrificial request for rain, and explains the meaning of Kalepo: the cow that never dries out.

It’s an appropriate name for a resilient community grappling with climate change, and a fitting metaphor for a couple who refuse to give up.

Sarah Marshall was a guest of Kalepo Camp (kalepocamp.com); Kenya Airways, which has return flights to Nairobi from £608pp (kenya-airways.co.uk); and Aardvark Safaris, which has four nights’ full board from £6,072pp, including all flights and transfers (aardvarksafaris.com) 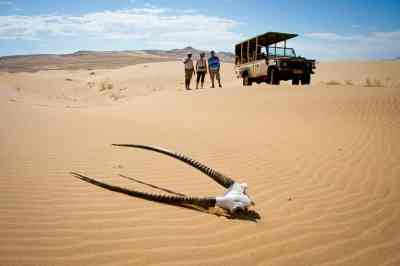 1. Serra Cafema, Namibia
Recognisable by their braids and ochre-smeared skin, Himba people have lived in Namibia’s northern Kunene region for at least 6,000 years. By a river that forms a border with Angola, this eight-chalet camp gives guests a taste of their traditional life. Accompanied by a translator, visitors spend time with families, learning how women create their striking body paint and discussing the growing pressures of modernization. The lodge supports the communities by providing water, grain and transport to medical clinics.
Details Three nights’ full board from £3,995pp (abercrombiekent.co.uk). Fly to Windhoek 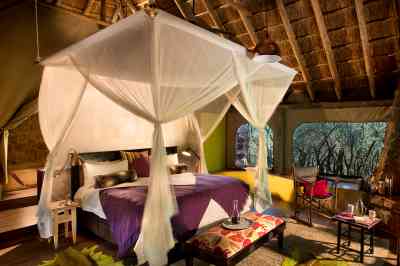 2. Jaci’s Tree Lodge, South Africa
Jaci’s is a collection of lodges on the private game reserve of Madikwe that gives shares to staff who have been with the company for more than five years; funds are held in a trust. Eight treehouse suites are connected by walkways, with a submerged hide below for photographic fanatics. The owners Jaci and Jan van Heteren are passionate about delivering excellent wildlife viewing; more than 8,000 animals were moved to Madikwe as part of the world’s biggest wildlife relocation.
Details Seven nights’ full board from £4,450pp (timbuktutravel.com). Fly to Johannesburg 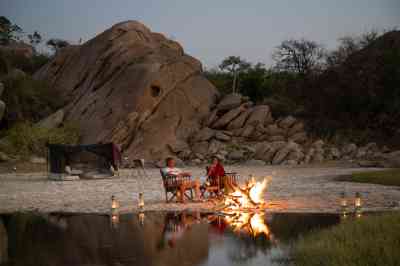 3. Yaeda Valley Fly Camp, Tanzania
One of Africa’s oldest tribes of hunter-gatherers still live in northern Tanzania’s Yaeda Valley, even though 90 per cent of their nomadic range has been lost in the past 60 years. Aided by NGOs they’ve secured land rights, while eco-tourism has helped to provide an income for education and healthcare. Join a family-friendly fly (temporary) camp to experience harvesting honey from baobab trees, cooking uprooted tubers on a fire and witnessing men with wooden bows and arrows head off on a sunrise hunt.
Details Three nights’ full board from £3,400pp, including flights (coraltreetravel.com)

Poor facilities responsible for non-hosting of NBA games in Nigeria