At the beginning of 2020, a plague broke out in the Horn of Africa that had not been observed for decades: Billions of desert locusts crossed the borders of the Arabian Peninsula, devastated arable land and grain fields and put the food security of 32 million people at risk the first warnings from the Food and Agriculture Organization of the United Nations (FAO). After a series of droughts and seasonal floods, the climatic extremes the region experienced over the past year created the perfect conditions for these insects to reproduce on biblical proportions.

Six months after the first wave hit, 650,000 hectares had been fumigated with biopesticides by August 2020, wiping out 440 million locusts. The plague was repulsed, but it was too early to declare complete victory. The battle is still going on today. One of the most active fronts is in northern Kenya. There, the FAO joined forces with the private sector, tribal leaders and the Kenyan government to fight the swarms. In densely populated areas, efforts must be made to contain infestation on the ground, with trackers spraying insecticides from specially modified backpacks or from machines on the backs of trucks.

However, this method is impractical in the vast plains and vast forest areas in the north of the country. For this reason, the authorities have chosen a system in which helicopters are sent from local airfields to scout the area during surveillance missions and to record information about the location and size of individual swarms. This data is then forwarded to the control center for joint operations, where a team of experts in various areas decides where to use the so-called “Locust Air Force”, aircraft equipped with delivery systems that can drop insecticides in large quantities on specific targets.

“We had no data last year,” says FAO’s Casper Sitemba. “When we started people called to report sightings of locusts, but we have now used various technical means to fill the data gap. We created several applications and with their help we were able to collect enormous amounts of data. The success rate of our control operations is currently almost 86%. Now we can see the results. Last year we didn’t even know how many swarms there were or where they were when the plague first hit. “

According to the FAO, the operation in northern Kenya was a “great success”. Sitemba reckons that from today’s point of view there are only a few swarms left and that these are not so remarkable. “They are what we call mini swarms: groups of locusts that have split off from other larger swarms. These can range from 20 to 30 hectares, while some were expanded to 3,000 hectares last year. We are reducing the size of the operation now that the situation has improved a lot, but we remain on alert as the rainy season is just around the corner, ”explains Sitemba.

To get an idea of ​​how to fight a locust plague from the air, we rode one of the data-gathering helicopters on a surveillance flight to see how the fight to save Kenya’s farmland is being led to the invaders.

FAO helicopters and planes at Nanyuki airfield. The aircraft are equipped with fumigation mechanisms to spray insecticides over large swarms of locusts. 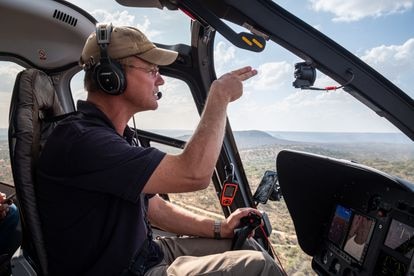 Before the Covid-19 pandemic and the arrival of the locusts, Kenyan pilot Chris Stewart carried celebrities, kings and others to luxury hotels in exclusive nature reserves. Now he’s hunting locusts. “It’s easy to mistake a cloud of smoke or dust for a swarm, and when the insects rest in trees they look like acacia blossoms,” he says.

3. In Samburu and Isiolo 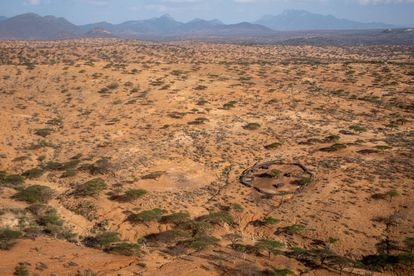 In areas in northern Kenya such as Samburu and Isiolo counties, semi-nomadic shepherds live with their flocks. From the air, it’s easy to distinguish their houses in compounds known as bomas, which are made from acacia roots to prevent predators from attacking livestock at night. Since the area is not very densely populated, planes can be used to spray swarms of locusts with pesticides. 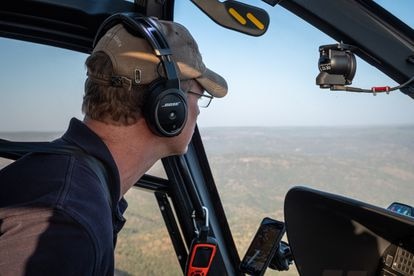 “I think I see something,” says Stewart as he swings the helicopter around on a sharp turn to investigate a possible swarm. On his iPhone, he receives information from the Operations Center in Lewa, where a team of experts compiles data on sightings and possible locations. 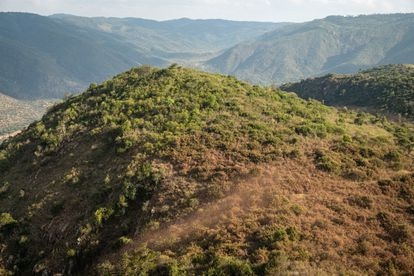 Stewart was spot on: a swarm of locusts rests on the ground on a mountain peak in Isiolo. The pilot flies over the area and enters GPS coordinates into his phone to measure the size of the flock in hectares. He also takes note of the wind direction in case the swarm climbs back into the sky. With this information, the analysts can predict which direction the insects will move next. 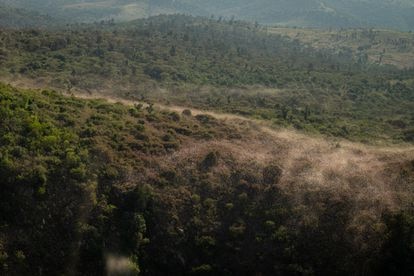 After daybreak, desert locusts usually stay where they settled the previous night. They are cold-blooded nomads who rarely spend two nights in the same place. When morning comes, they wait for the soil to warm up and the air to warm their bodies before heading out in search of more greenery to devour. 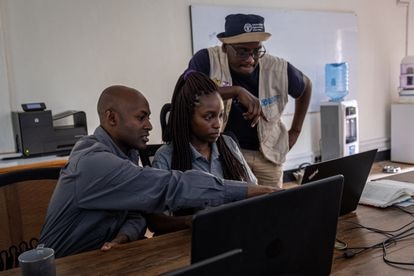 Yussuf Kurtuma, Christine Kebaba – both employees of the technology company 51 Degrees, which helps track the locusts – and Casper Sitemba watch a screen filled with data. Information from Somalia, Ethiopia and Kenya is compiled and analyzed in the operating room. “We collect all the information that the people in the villages give us,” says Kurtuma. “The elders and persecutors who work at various companies collect it. We put all this information together on one platform and then share it with everyone who works on the ground to stop the desert locusts. “ 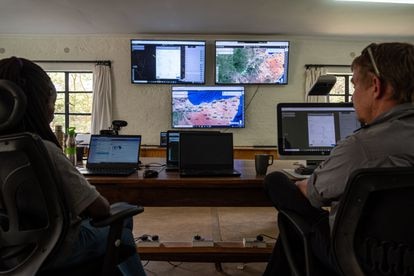 The data collected by the helicopter crews is sent to the joint operations control center in Lewa, where 51-degree worker Christine Kebaba helps monitor the movement of the swarms. “It’s exciting to know that I’m working to ensure food security in the Horn of Africa by eradicating desert locusts,” she says. “If we weren’t up to date, many people would go hungry because food was scarce. The locusts would have eaten it. “ 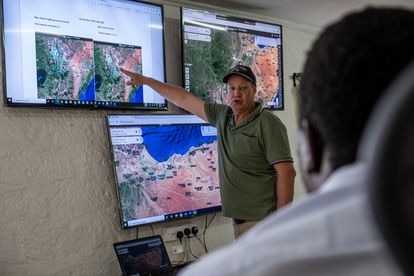 Technical analyst Heath McRae presents data on the desert locusts to Martin Gichuru, who works for a UK government consultancy. In the control center, private sector employees work with government officials and experts as well as the Kenyan army. The FAO campaign is funded by a variety of institutions, including the UK Foreign and Commonwealth Offices.

10. Memories of a Samburu Elder 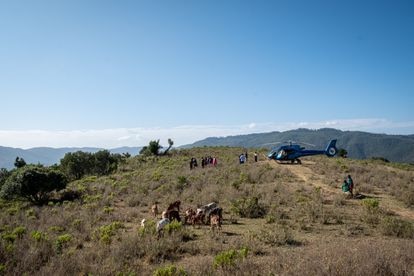 As soon as the coordinates have been sent to the control center in Lewa, a fumigation aircraft is dispatched. Meanwhile, the surveillance hacker is waiting to arrive on a nearby mountain slope. His presence attracts the attention of some Samburu tribesmen. An elder, or mzee, recounts his memories of a locust plague that struck the area in 1950. 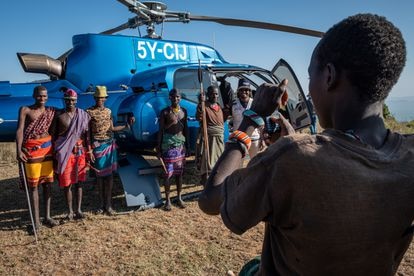 Several Samburu warriors and elders gather around the helicopter to see what happens. While the crew waited for the plane to arrive, the Samburu men took the opportunity to take a few photos. 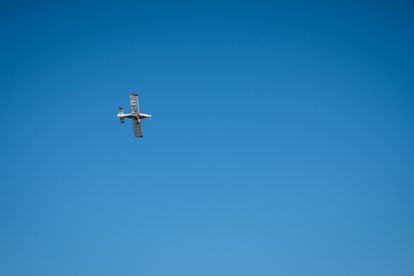 The plane is spotted in the air. Although the blue FAO logo is on the wings, these aircraft are owned by a private company. Some of the planes equipped to distribute pesticides come to Africa from Canada. 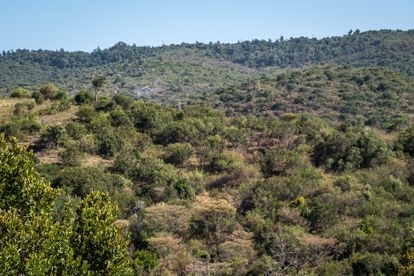 As the plane sprays pesticides on the grasshopper-infested bushland, the helicopter crew keeps a safe distance before examining the area. Fumigation is a dangerous operation: a few weeks ago a plane crashed in Ethiopia and killed its pilot.

14. The damage the locusts cause 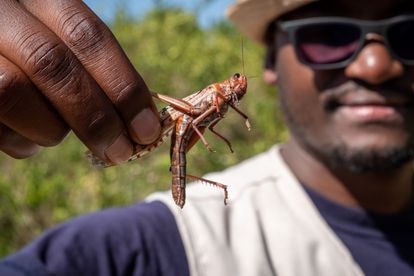 “A little over a year ago billions of locusts covered the area,” says Sitemba of the FAO, holding a locust that was knocked unconscious by the fumigation. “This was one of the worst plagues in over 70 years. It has threatened the food security and livelihoods of some of the most vulnerable people in northern Kenya. “ 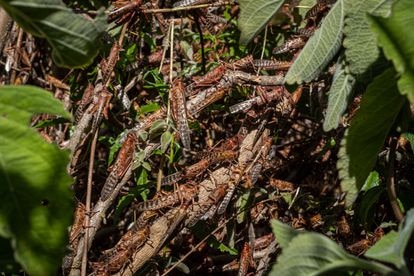 A male grasshopper can grow up to six inches long and a female nine inches long. They are always hungry and can consume the equivalent of their own body weight in a single day. They feed on rice, millet, corn, and sugar cane, and devour virtually every part of the plant.

16. From swarms to mini swarms Although the fumigation plane covered most of the locust swarm, it is virtually impossible to get every single one of the insects. There are always smaller groups that manage to separate from the main school. In this case, the resulting mini swarms can cover areas between 20 and 30 hectares. 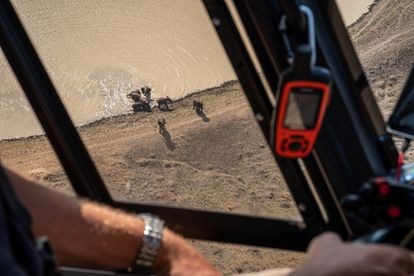 The operations center in Lewa is located in a national park in northern Kenya. The planes land and take off from a narrow runway surrounded by wildlife such as giraffes, elephants and rhinos. 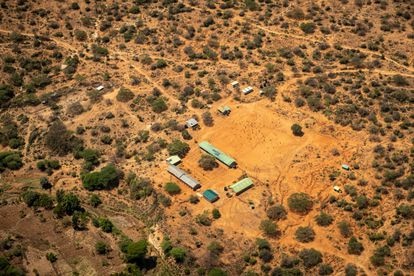 The fumigation aircraft can only be used in areas where there are no water sources, farm animals or villages nearby. The insecticide used has been certified as safe by the United Nations, but to ensure that the sprayed areas are checked regularly. 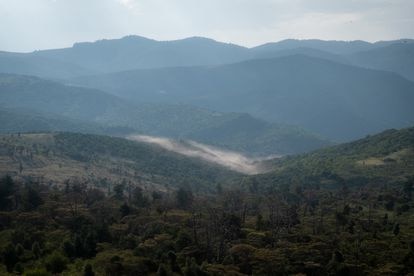 On the way back to Lewa a cloud of locusts appears on the horizon. A swarm can contain millions of hungry insects with an average of 40 to 80 million locusts. Although desert locusts like to live individually, they become gregarious when they are in large groups. “A year ago we didn’t have the systems or the capacity to manage data to fight a plague,” says Sitemba. “But little by little we have developed it and when an invasion comes we will be ready for it.”