New research released today by scientists from CABI and the Kenya Plant Health Inspectorate Service (KEPHIS) confirms that the apple snail (Pomacea canaliculata) was first discovered in Kenya. The apple snail is widely recognized as one of the most invasive invertebrates in waterways and irrigation systems. It threatens rice production in Kenya and begs the question: How much damage will it do in Kenya and how will it continue to spread?

The scientists, including the lead author and senior molecular microbiologist at CABI, Dr. Alan Buddie, published their study “First report on the invasive apple snail Pomacea canaliculata in Kenya” in CABI Agriculture and Bioscience. The paper was also published as a preprint for agriRxiv in December 2020.

The discovery came after reports of an invasive snail causing crop damage in the expansive Mwea irrigation system in Kenya, where samples of snails and associated egg masses were collected and sent to CABI laboratories in the UK for molecular identification. DNA barcode analysis using the cytochrome oxidase subunit I gene, supplemented by elongation factor 1 alpha sequencing, confirmed the snail’s identity as Pomacea canaliculata, a pest native to America.

This timely identification shows the advantage of molecular identification in combination with a reliable database such as that provided by the Barcoding of Life Data system. CABI found that the egg masses tested gave the adult snails an identical barcode sequence so that identification could be done more quickly.

Pomacea canaliculata is one of the 100 worst invasive species in the world. It was believed that its introduction and spread in Southeast Asia was largely due to deliberate introduction, and it has become a serious agricultural and environmental pest, causing significant economic losses in wetland rice cultivation and threatening biodiversity. 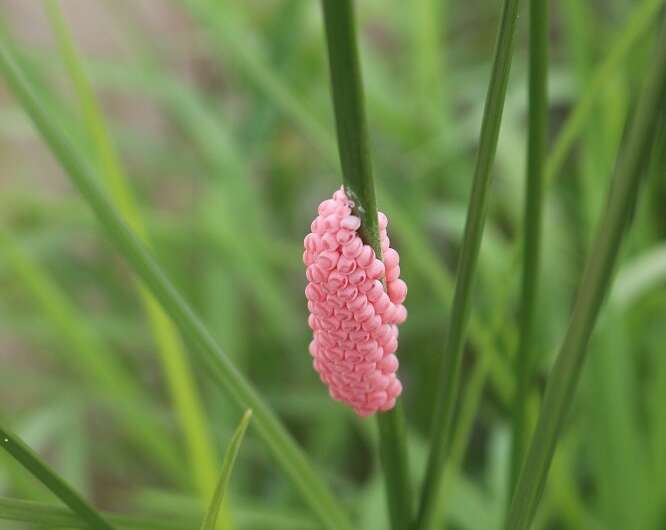 Rapid assessment and management of the potential threat from invasive species is critical. Farmers in Kenya are already talking about the damage done to rice in Mwea, where over 70% of the country’s rice is grown.

Given the impact of this species in Asia, an assessment of the risk in Africa and the implementation of an appropriate response in Kenya and elsewhere is needed to address this new threat to agriculture and the environment.

Prof. Theophilus Mutui, Managing Director of KEPHIS, said: “Since it was first detected in Mwea, the apple snail has gradually spread to other areas. Strict quarantine measures should be instituted and implemented to curb not only the spread of the snail but also containment Entering other high-risk rice areas in the country. To achieve this, widespread management should be implemented, such as training and awareness-raising, installation of physical barriers, mechanical control and community-based snail management. “

Dr. Alan Buddie, lead author and senior molecular microbiologist at CABI, said, “Molecular tools provide invaluable aid in species-level identification within groups of organisms that look almost identical to non-experts. In this case, taxonomic experts. Invertebrate groups are rare. We have shown that as long as we can get a small amount of DNA from a snail or even a single egg, we can get the same level of identification when experts have authenticated sequences in publicly available sequence databases. “

Dr. Ivan Rwomushana, Senior Scientist, Invasive Species Management, CABI, said, “We collected samples of the snail for barcoding. After confirming the new species, we conducted a demarcation survey to determine the extent of the spread of the snail. Our results show that other systems Still unaffected, although seeds and machinery brought in from Mwea are at risk of invasion. We will work with relevant national authorities to develop a strategy to respond quickly and contain this new invasive species. ”

Genome research has revealed the mystery of invasive apple snails

Quote: New research confirms the presence of a highly invasive apple snail in Kenya (2021, March 25), released on March 25, 2021 from https://phys.org/news/2021-03-presence-highly-invasive-apple-snail. html was retrieved

This document is subject to copyright. Except for fair trade for the purpose of private study or research, no part may be reproduced without written permission. The content is provided for informational purposes only.

Benin v Nigeria: squirrels that could hurt the Super Eagles