The country’s electricity sector was privatized in 2013 to end decades of relative darkness, but things have only deteriorated in the hands of private investors.

Abiola, a young woman in her thirties, owns a store selling frozen foods on University Road in Ilorin. The business relies heavily on electricity, but it hardly ever comes. And if it does, it is sparse and adds up to an average of four hours a day.

Despite the ongoing blackout, the monthly bills were “insane”. It averaged 13,000 naira ($ 31.52) per month. So she thought she had enough and in 2016 she opted for a prepaid meter with the hope that she would only pay for the amount of electricity she used.

But while that might have been the case, she has tried hard to understand the tariff, which is plagued by constant increases.

” This month I topped up three times this month: the first time, 5000 naira ($ 12.14); the second time 3000 naira ($ 7.28) and now I’ve made another 7000 naira ($ 16.99) and this is only the middle of the month. And there is no light, yesterday we only had two hours of light and it came at midnight, ”Abiola told TRT World. Right outside the store you could hear the creaking sound of their gasoline-powered generator.

Without much choice, she relies on the generator to maintain her three fridges to keep the business going, but the cost of running the generator for most of the day goes deep into her daily profits, she said. She spends between 4000 and 5500 naira ($ 9.7 to $ 13.3) every day, which is a significant percentage of her daily profit.

It has become a common sight for shopkeepers across Nigeria to use oil lamps to keep their businesses going after dusk. (AP)

The approximately 200 million inhabitants of Nigeria are supplied with only 4,996 MW of electricity, and only 52 percent of the population have access to the national electricity grid. The rest are not receiving any electricity whatsoever. For decades, providing constant electricity has been the holy grail of any government.

In 2013, former President Goodluck Jonathan privatized the electricity sector to supposedly end decades of relative darkness, but the sector has only gotten worse in the hands of private investors. A clear sign is the constant collapse of the national power grid, which failed three times in May alone and a total of 29 times in the last three years.

“If you look at the historical nature of electricity and gasoline management in Nigeria, you will find that both were managed largely as public goods rather than goods whose prices should largely be determined by market forces,” said Ikemesit Effiong, research director at SBM Intelligence, told TRT World.

“And because we never managed these things as market goods, but as social goods, there was significant underinvestment in electricity … across all pillars – generation, transmission and distribution, and especially consumption.”

The electricity tariff was increased five times between 2015 and 2021 under the current administration. The last – a 50 percent increase – was announced five days after 2021, when Nigeria was still actively affected by the economic fallout from the coronavirus pandemic, which led to a skyrocketing 18.2 percent inflation rate.

The National Electricity Regulatory Commission (NERC) disproved the report of an increase, finding that rates were adjusted from NGN2.00 to NGN4.00 perkWhr to reflect the partial effects of inflation and exchange rate fluctuations.

The January hike was eventually suspended due to threats from the National Labor Congress and popular outcry, but is now back on track to be implemented in July. 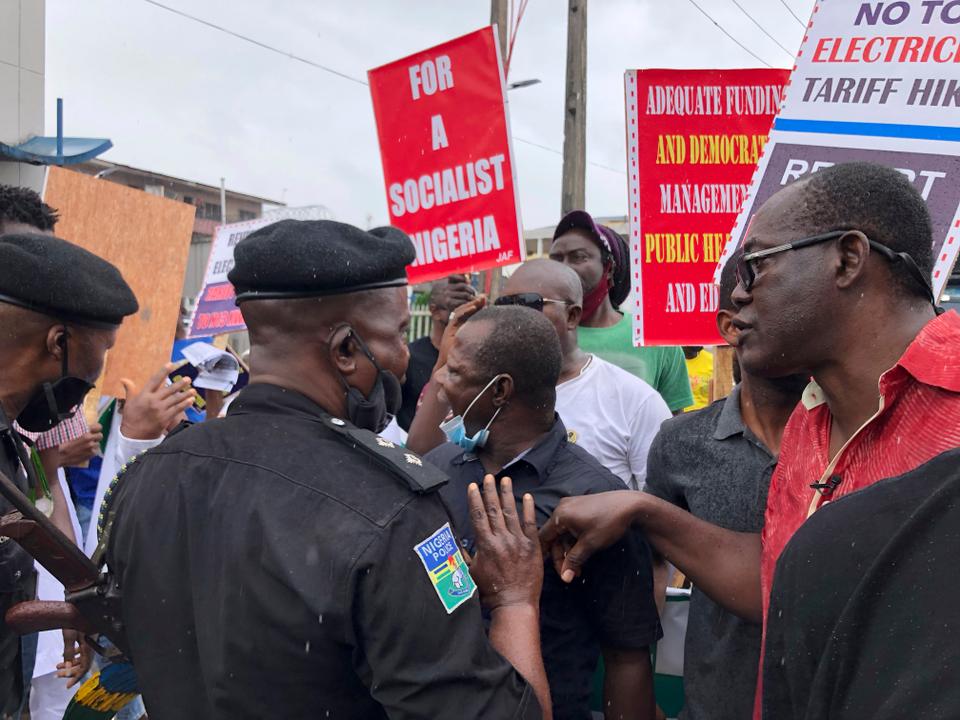 People across Nigeria have been seething with anger since the government allowed gasoline and electricity tariffs to increase. The country witnessed several protests over the past year. (AP)

The continuous increase affects the ease of doing business in the country. With the World Bank Doing Business ranking, Nigeria ranks 131st in the world. But the burden has become almost unbearable for small businesses.

Small and medium-sized enterprises (SMEs) make up as much as 96 percent of businesses and 84 percent of employment in the country, and a significant proportion of them depend on electricity to function. “ I could see that easily [hike in electricity tariff] wipe out small businesses … that have electricity as a major input. I would argue that this is already happening, they are life sustaining, or are about to be life sustaining. If this is not addressed, coupled with other adverse economic conditions in Nigeria, many companies will perish as it doesn’t make sense from a profit perspective. It’s reached emergency levels, ”Ikemesit said.

Olomu, a primary school teacher and mother of three children in Ilorin, sells groceries – loaves of bread, bagged water and soft drinks – in a sparse kiosk in Tanke. The business is supposed to supplement her skinny teacher’s salary.

Like the majority of Nigerians, she doesn’t have a meter, so she receives her bills on a regular basis. As of 2019, only 43 percent of Nigerian electricity consumers had access to meters. Most of the time, consumers would team up to use a meter, and in the absence of a meter, as in Olomu’s case, the price is calculated at the distributor’s discretion. Olomu said she pays an average of 5,000 naira a month for “darkness”.

To make up for the lack of electricity, she is looking for an alternative in buying blocks of ice to freeze her goods. This costs them 500 naira ($ 1.2) per day, which is almost 15,000 naira ($ 36.4) per month. That alternative is almost the sum of what it makes for a profit, she said.

At the time of the conversation with TRT World, the sales company in its region has been supplying the low voltage for several days due to rainfall. The voltage supplied is not sufficient to supply your refrigerator with power. “And yet we’ll get a bill at the end of the month,” she quipped. ” How many bags of water will you sell in a day to make the profit at which 5000 naira (US $ 12.1) can be set aside for electricity? ”

Abiola sees no end in sight. She has become skeptical of positive change as her years as a trader in her industry have taught her to constantly adapt to the whims of the energy sector, increasing the cost of running her business, and making it harder to make ends meet .

“ We have no choice but to see how we cope with a situation we are not happy with. We have nothing to do with it, ”she said.

Ikemesit’s assessment of the energy sector is grim. For small and medium-sized businesses like Abiola and Olomu, this isn’t good news. “The energy sector is in such bad shape that it will take us significant investment for several years with no concrete results before we get to the point where transmission and distribution are gaining weight,” he said.

Those several years would mean Abiola, Olomu, and millions of business owners like them would continue to battle an underdeveloped energy sector that is showing no favorable signs of improvement.

” It was a bearish situation for the business. Sometimes we have to take our eyes off the expense. If you have to get by on electricity alone, this business no longer exists, ”Abiola said.