Odinga’s son, Raila Odinga, may be elected president on Tuesday when Kenyans go to the polls.

Oginga Odinga was a major figure in the struggle against British colonialism. After independence in 1963, the British identified pro-West President Jomo Kenyatta as their preferred leader. Vice-president Odinga was leftwing and open to relations with the communist bloc. Concerned that Odinga might replace Kenyatta, constitutionally or otherwise, the British tried to undermine him.

Although, as British diplomats recognized, Odinga was not a communist, according to historian Dr Poppy Cullen of Loughborough University, he “posed a direct threat to British interests”. Not only did Odinga favor radical domestic policies, he accepted financial support from the Soviet Union and communist China. But President Kenyatta could not side-line Odinga, as he represented the powerful Luo tribe.

Declassified files reveal four “black” operations against Odinga. In September 1965, the Daily Telegraph ran a story headlined “’Revolution’ document in Kenya”. It reported on a pamphlet issued by the “People’s Front of East Africa” attacking Kenyatta’s government as “reactionary, fascist and dishonest”. But it praised Odinga as “a great revolutionary leader” who would be brought to power by a “newly formed People’s Revolutionary Kenya Socialist party”.

In fact, it was a sophisticated propaganda operation that increased suspicions that Kenya’s vice-president was in league with communist China. The IRD sent 80 copies of its pamphlet to “leading personalities and the press”, the SEU recorded. Kenyan newspapers gave it massive coverage. Kenyan ministers were thinking to have been convinced that the leaflet was genuine.

Referring to Odinga’s rightwing rival, Tom Mboya, the SEU’s John Rayner wrote: “A secret report said that Kenyatta had thought it to be the work of the Chinese, that Mboya had considered it to have been put out by Odinga, and that Odinga had claimed that it was the work of the CIA.”

Dr Cullen says: “It clearly shows that Odinga was considered the main threat to British interests, and the lengths to which the British were willing to go in order to smear him.”

Odinga suspected he was being targeted. In 1964, he complained publicly of a “spate of vilification and facile criticism” in the British press. Picking out British newspapers including the Telegraph, whose correspondent Odinga expelled from Kenya four months later, he complained about reports implying he was plotting against Kenyatta.

“British intelligence agents,” he concluded, “were sanctioned by their government to pass on official information to the so called ‘independent’ press of Fleet Street.”

A declassified report for June to December 1964 reveals what appears to be the first SEU operation against Odinga. In October, the SEU produced a leaflet, purporting to originate from the “Loyal African Brothers”. branding the Kenyan leader “a tool of the Chinese” communists. 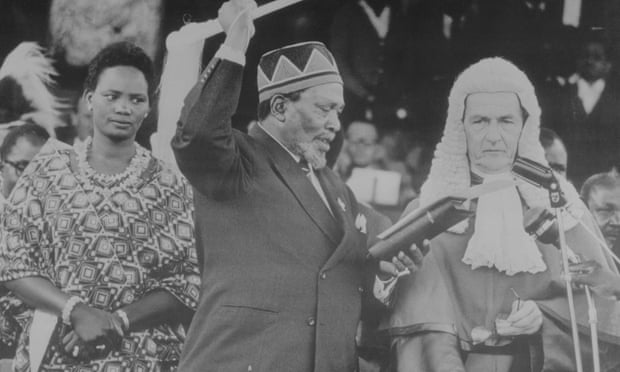 The Brothers were an invention of IRD’s propagandists. Over nine years, 37 leaflets were issued by the fake organization purporting to want “to free Africa of all forms of foreign interference”.

Claims by Kenyatta in April 1964 that “Mr Odinga and his associates may attempt some kind of armed or other action to seize power” prompted plans for British military intervention in case fears of a coup materialised.

It also prompted another SEU operation accusing Odinga of involvement in a leftist coup.

Despite raids on the offices and homes of Odinga and other radicals, resulting in the confiscation of arms, no concrete evidence of a coup was found, and he remained vice-president.

An assessment by Britain’s high commissioner pointed out as evidence to Russian arms shipments, weapons in communist embassies and premises under Odinga’s control, as well as his involvement in military training for Kenyans in communist countries. But even he concluded that “the plotters expected the overthrow to be possible by more or less constitutional means, and that the arms and trainees were merely to give them extra assurance and backing if required”.

According to Cullen, author of Kenya and Britain After Independence, although fears were genuine, “the coup was most likely largely fictional”, a “pretext for moving against Odinga”.

Nevertheless, IRD’s propagandists weaponized the high commissioner’s report. An article headed “Kenyatta Frustrates Leftist Coup” was planted in a Swiss publication in a bid to push it into western European media. “It is now clear,” it states, “that only resolute action by President Kenyatta successfully frustrated a pro-Communist leftist coup in Kenya.”

According to Professor Scott Lucas, a University of Birmingham specialist in British foreign policy, “The story of British propaganda operations in Kenya is a reminder that the days of a declining empire were not as much pomp and circumstance as deception, disinformation and dirty tricks. ”

At its “heart it was an effort by those in London to continue to exert control over a former colony well after it had become independent,” he said.

Odinga resigned from Kenyatta’s government in 1966 and established a new political party, the Kenya People’s Union (KPU). But the country’s experiment with multi-party democracy did not last long. Members of the KPU were detained without trial under draconian new laws.

In 1969, the party was outlawed. Odinga was placed under detention and later imprisoned by Kenyatta’s successor, Daniel arap Moi.

His son Raila, who followed his father into politics, was repeatedly imprisoned without trial before Kenya returned to democracy. It remains to be seen whether he will realize his father’s ambition and become president of Kenya.

TechNigeria: A weekly digest of what went down in Nigeria’s tech space