no It has to be said that an extremely important, insightful game of rugby union is fast approaching. For both South Africa and the British & Irish Lions, the practical implications of success and failure are obvious enough to require few Shakespeare speeches. Perhaps more importantly, at the end of a uniquely discouraging week, the two sides can save what remains of the sport’s honor.

Even under a clear blue cape sky, there is an unusually malevolent feeling in the air. By chance or by design – and regardless of the outcome of the series – rugby has been driven into a demolition-style war that will have no long-term winners. If a World Cup winner coach goes viral on social media with an hour-long video monologue blaming unfair referees for his team’s handicap, what price does the immutable oval values ​​of athleticism and respect come with?

The reaction in South Africa to the unprecedented grumbling from Rassie Erasmus – and his good buddy Jaco Johan – after the Springboks lost their first Test 22-17 was almost as surprising. Rarely was there any indication of impartiality or recognition that referees could be human and that not every phone call massively favored Lions. The recurring suggestions that a black South African captain was basically ignored while guest skipper Alun Wyn Jones was pampered are also serious and possibly even more divisive.

It’s all a million miles away from the feel-good shine of the 2019 South African rugby world cup triumph, when the sight of Siya Kolisi heaving the Webb Ellis Cup in Yokohama into the late evening sky was truly an image for the ages. Perhaps that is the root of the problem. Could it be that Erasmus has gotten so used to winning that, since he has practically not played international rugby since then, he simply cannot accept a sudden relegation?

Either way, bright minds like Erasmus and Boks’ assistant coach Mzwandile Stick seem to be in danger of losing the plot. Whether or not they were tough in the first Test – and the decision not to sin Hamish Watson in the second half was definitely a disappointment for the Lions – the subsequent reaction was way over the top. When Stick insists the Lions started it all – by questioning the nomination of a South African, Marius Jonker, to TMO – he realizes the wrong ending of his last name.

All of this whining about the uplifting traditions on which Lions folklore is based is so far removed that one might want to cry first. The next feeling is a sincere sense of sadness that it happened. If we’re honest, something like that has brewed itself in a sport in which every mishap would have half a dozen different penalties conceivable. Since the camera perspectives, which are immediately available to the TMO, are also important, the leeway for the players is narrower than ever. Hence, the temptation for a tech-savvy coach to wrap up a few clips and the
always impartial social media jury to turn a molehill into table mountain.

To be clear, no one completely exempts World Rugby; this was always a tinderbox of a series and it was a tempting fate not to be able to whistle a neutral TMO replacement after the original election was withdrawn. It’s also fair to speculate that if the Lions lost the first Test, conversations with Saturday’s umpire, Ben O’Keeffe of New Zealand, might have been slightly different in tone. 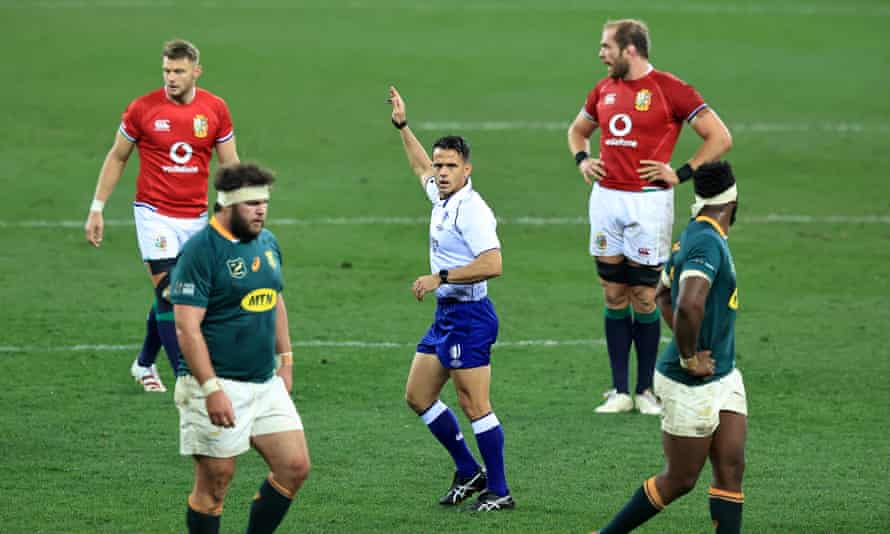 But the Lions didn’t lose, opening the traditionally brutal scenario of a competitive springbok team caught between Cape Town’s most famous rock and a depressingly tough place. Win the second Test and for the first time since Jeremy Guscott happily halved the distinctive black and white posts in Durban with his drop goal in the 1997 Second Test, the Lions will have carved out an unbeatable 2-0 series lead.

It was not without reason that Lions forward coach Robin McBryde revealed that his pre-game reading is a book called Ja-Nee, written by Dugald Macdonald, former Oxford University and South Africa’s No. 8. Macdonald won only one international for the Boks, but his debut coincided with the Lions Series Second Test in 1974 when the tour was 1-0 up, as it is now.

The match has been dubbed the most important game in South African history and fueled an angry physical reaction, not least in the third Test, later known as The Battle of Boet Erasmus. It was the game in which the Lions activated their infamous “99” call to provide collective protection for all players attacked by their opponents. In the midst of the chaos, Gordon Brown hit his opponent Johan de Bruyn so hard that he pushed his glass eye out, prompting 30 players and the referee to interrupt the hostilities and look for them together.

While history now records that the Lions won both games – 28: 9 and 26: 9 respectively – and disciplinary excesses are now punished more severely, McBryde does not foresee that the modern day Boks will humbly settle for second-best. “You will return to that physical nature,” McBryde predicted. “They did that in 1974 after they lost the first test, and I’m sure they’ll try on Saturday: get stuck in us. It’s not going to be easy, is it? “

With the Lions adamant, Dan Biggar will start at halftime and that every stage of his concussion protocols has been properly executed kicks and a forward-dominated 6-2 bench that is betting that the Lions will take kickable penalties and, under the self-inflicted pressure, that hampered their efforts for the first 40 minutes of the series wither away.

The reality, however, is that there is still room for improvement on both sides. If the score is close with 20 minutes to go, the Lions hope that their collective fitness will show up again and will only deliver their third winning streak in South Africa since 1896. “We believe we can produce an achievement that will win us over” the test match and the series, ”insisted Scottish captain Stuart Hogg, quietly encouraged by the motivational influence of Jones and Owen Farrell this week. If O’Keeffe’s referee performance is barely mentioned after that, so much the better.