In 1981 the South African artist Sue Williamson went to the sixth district of Cape Town, where the houses of black and mixed families were demolished as part of the apartheid government’s efforts to consolidate urban segregation. She collected debris from these forced moves and then assembled them in the pristine white of an exhibition space not far for one of her earliest gallery installations, “The Last Supper”.

“It was doing a lot of publicity back then,” says Williamson, 80, in her Cape Town studio, recalling some security officers attending the show: “I was delighted they came.” In a 2015 interview she said of the work: “As an art enthusiast, you looked at the installation of rubble. But in fact, you are passing it on in a much larger scale each day of your life as you drive in and out of Cape Town. “

That impulse to use the textures, shapes, and even the physical artifacts of destruction and protest permeates all of Williamson’s work and now key pieces in her long career as an artist and activist – somewhere between heated truth-finding and cool, conceptual tricks – are due in March at the Goodman Gallery in London.

A work on display brings some of the rubble from District Six to London: hairpins, cute wrappers, splinters of dishes, other bits and pieces, all of which are kept in cast resin. An accompanying piece documents the interior of a house belonging to Naz Gool Ebrahim, a community leader and friend of the artist. On the eve of his destruction, Ebrahim invited friends and family to graffiti the walls in a gesture of defiance and remembrance: “Welcome to the Last Supper,” wrote Ebrahim. 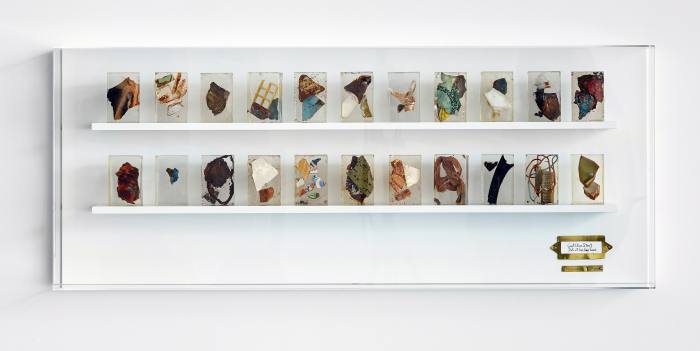 Williamson, whose family emigrated to South Africa from Great Britain in 1948, began her artistic career by screenprinting South African women who influenced the liberation struggle: they became iconic and popular portraits that were circulated as postcards in the 1980s. After working overseas as a copywriter in Mad Men-era New York, she returned to South Africa and was “pulled out of lethargy” by the events of 1976, when the youth of Soweto rose against apartheid.

This year it marked a “jagged fault line” in the history of the country. It marked the beginning of the end of white minority rule: a rolling wave of strikes, boycotts, evasions, rallies and mass movements that reached a crescendo of hope and anger in the 1980s. 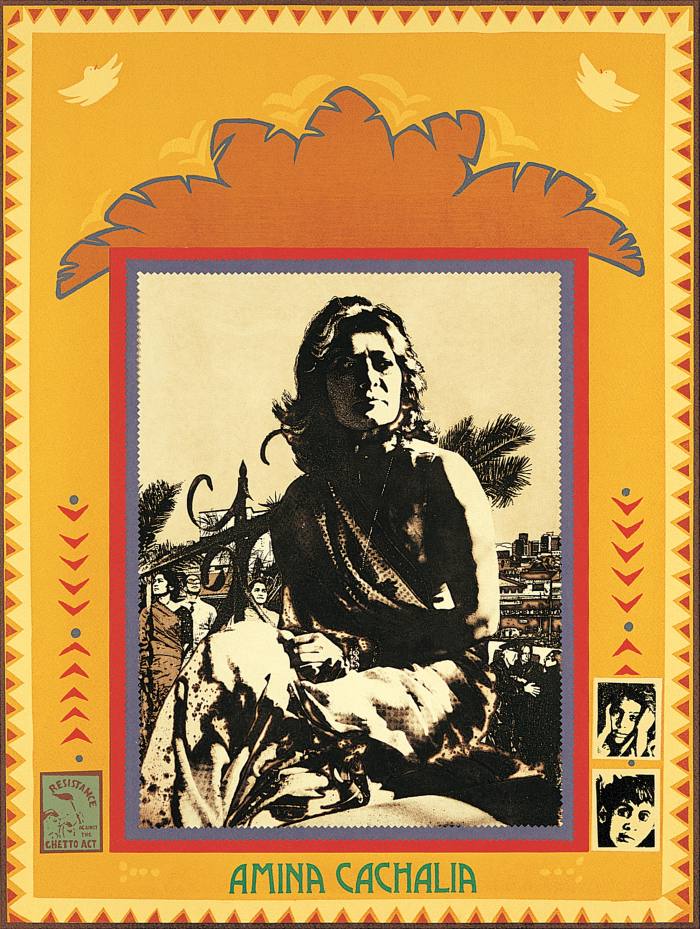 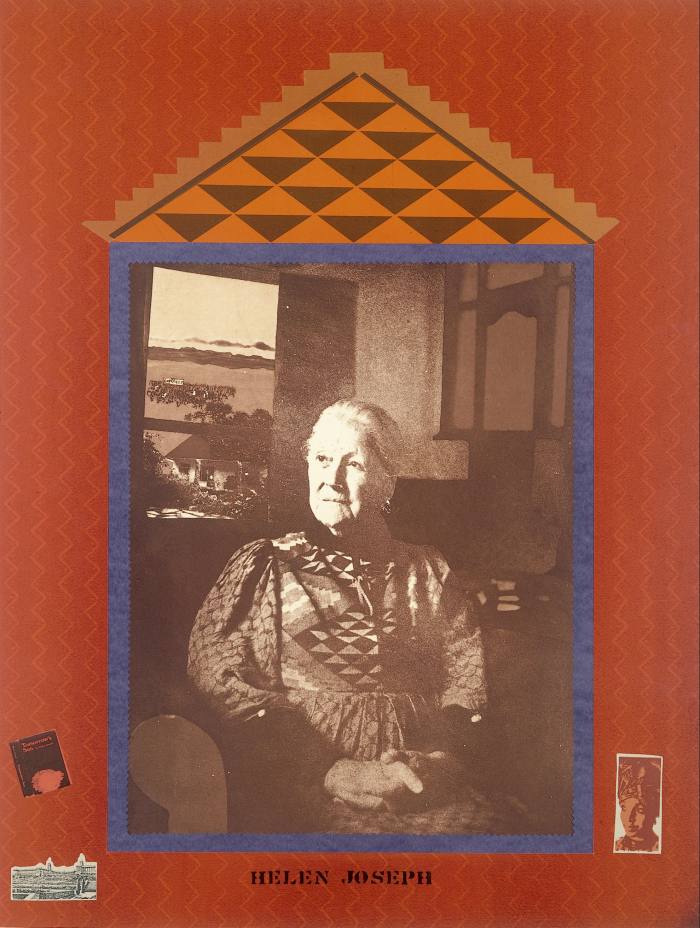 Williamson documented the paintings, drawings and sculptures of this moment – along with their posters, linocuts, comics, banners, T-shirts and graffiti – in her influential 1989 book Resistance Art in South Africa. “I fell where angels are afraid to step,” she says of her work as a critic, “because I’ve never made art history or anything.” In the introduction she quotes a few lines by the writer Menán du Plessis, which serve as a good description of Williamson’s own practice: “It is neither the morally confident art of liberal protest nor the defiant art of indignation, the multifaceted, complex, extraordinarily rich art of resistance . It’s rooted right in the context of the struggle. “

After Nelson Mandela’s African National Congress The party was elected to power in 1994. Williamson turned her attention to the Truth and Reconciliation Commission (TRC) hearings from 1996 to 1998. The TRC was mandated to hear from victims and perpetrators of human rights violations and was able to grant amnesty to politically motivated killings on a full disclosure basis.

Here, says Williamson, was the zero-sum game that was built into the project: “Only the amnesty guarantee allowed security forces and political assassins to emerge from the shadows and reveal what had happened to missing loved ones. However, this has often been at the expense of justice, accountability, or law enforcement. “Once celebrated and emulated worldwide, the TRC is now viewed with concern by many younger South Africans.

Williamson’s series “Truth Games” (for me the most visually striking work) leads us into these changing, murky zones. His panels are literally a sliding puzzle. The background layer consists of enlarged newspaper photos from TRC hearings: victim on the left, perpetrator on the right, event in the middle – but cropped or enlarged in such a way that the central trauma often becomes cryptic or confusing. There are movable, semi-transparent slats above the pictures: text parts from TRC certificates or news reports. In order to fully engage in work, you need to move the words. This process reveals some archive details and obscures others.

Williamson worked briefly as a journalist early in her career when, as a woman in a newsroom in Durban, she was rarely allowed to report on important stories. Instead, her job was to put together scrapbooks of newspaper clippings – “watch books” – and this archiving impulse has never left her. Boxes with cut and pasted fragments form the basis of what she calls the “skeletal dialogue” of her TRC work. “I was interested in the exact words people used to present their case,” she says. “I wanted to give the most convincing language from every side.”

The words slide over the dots of old newspaper pictures: nervous tics, grimaces, involuntary smiles, narrowed eyes. Even in the inferior photos, she noted, “the body language of the speakers came through”. 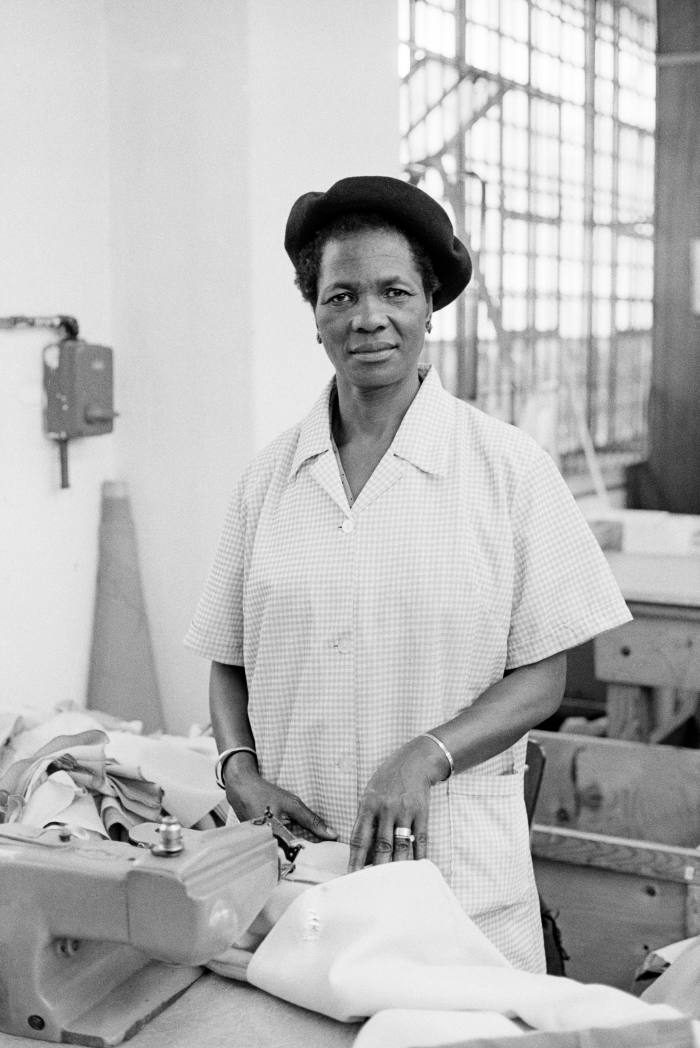 ‘Caroline Motsoaledi’, 1984, from ‘All Our Mothers’ © Sue Williamson / Goodman Gallery 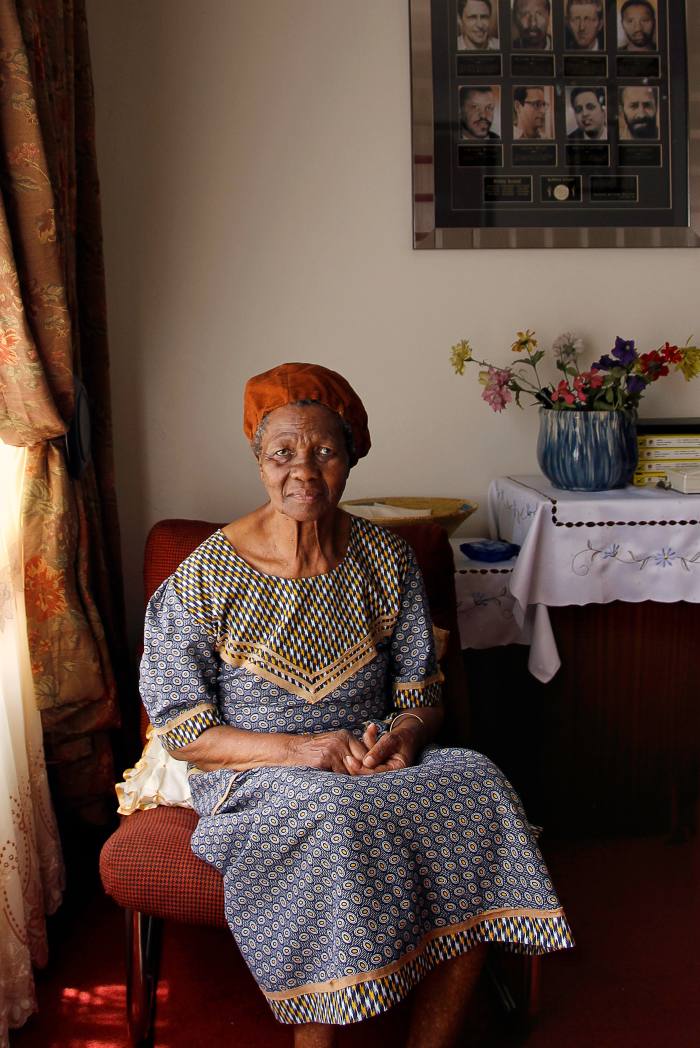 Many of Williamson’s early works grew out of personal relationships forged through collective struggle. But as her art moved into the public domain (and further into the post-apartheid era), she was criticized for criticizing the ethics of her portrayal of the lives of others across racial, class, and cultural lines. But Williamson seems unimpressed in the undisturbed but cautious way she talks about her work. She says: “You have to be very careful with this kind of work. But people know that there is no obligation to finish a project when they start with me. You can always get out if you feel uncomfortable. “

A young woman, Candice Mama, can be seen on one screen of this two-channel installation. She tells the story of meeting Eugene de Kock, the commander of the most notorious death squads of apartheid and the man who killed her father. “It’s a pleasure to meet you,” De Kock says to her and each family member when they meet him in prison while a pastor is presiding. Mama speaks of believing in De Kock’s sincerity and repentance. A photo of the family with the main killer of apartheid in a jumpsuit with maximum security flashes. “Do you forgive yourself?” Mama asks De Kock. He replies that no one who has done the things he has done can forgive himself.

On the other screen, a young man, Siyah Ndawela Mgoduka, is listening. He’s also lost his father, but his only contact with the killers is the memory of a security officer giving the middle finger at a TRC hearing. Mgoduka can’t bring himself to believe the story Mom tells so sincerely right next to him, even if he wants to. It is a story that sounds like it has been told many times, (like many TRC cases) an exemplary story, to have become a parable. 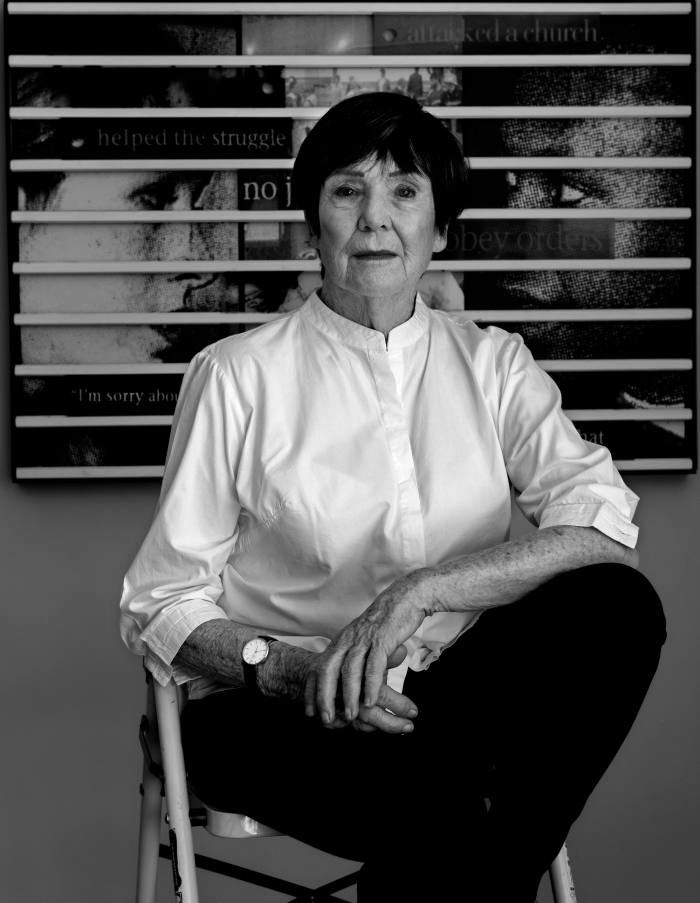 The body language of Mama and Mgoduka as they listen, the complex expressions that go over their faces – these unspoken elements say so much. The digital split screen (used in many of Williamson’s more recent works) shows how their art has responded to changing times and technologies over four decades. Here and elsewhere, the work presents us with the riddle of two deeply felt, equally valid truths: truths that every listener wants to respect, but which they also find uncomfortable, impractical and unsolved.

Follow @FTMag on Twitter to catch up on our latest stories first. Listen to our Culture Call podcast where FT editors and special guests talk about life and art during the coronavirus era. Subscribe to Apple, Spotify, or wherever you listen.