Facebook and Twitter posts in Kenya are sharing a purported front page from UK daily newspaper, The Guardian, accusing Michael Spencer, a British philanthropist and a member of the House of Lords, of being part of atrocities committed in the Democratic Republic of the Congo. The rumors followed an airport incident with Spencer and a political supporter of the Kenya’s deputy president William Ruto. However, the headline on The Guardian was digitally altered, and the newspaper itself denied having published it.

On January 8, 2022, this Facebook post shared a purported front page from The Guardian and asked why a Kenyan Member of Parliament, Oscar Sudi, was in the company of Spencer.

The post was shared a day after local media reported that Spencer and Sudi – who is a Ruto supporter – were stopped from using a VIP terminal by security at a Kenyan airport.

“Michael Spencer Accused of funding Congo militia,” reads the purported headline. The rest of the report beneath the headline has been blurred to make it illegible.

On Twitter, the same image was shared here alongside another claim that Spencer was funding Ruto’s presidential campaign ahead of elections on August 9, 2022. While the country’s electoral body has regulations on how much should be spent during political campaigns, donors are seldom revealed.

“Show me your friends and I will tell you who you are. Michael Spencer was accused of funding Congo militia. Michael Spencer is the one funding Wheelbarrow activities. His mission is well known. #UKshouldTellUs,” reads the tweet. 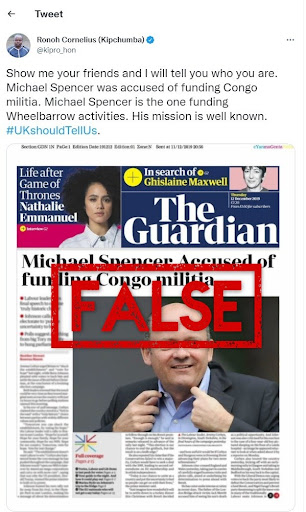 The date of the edition in question – December 12, 2019 – can be found in the top right corner of the page.

A Google search using the keywords “front page The Guardian December 12, 2019”, led to the original post on Twitter by the newspaper on the aforementioned date. The real headline reads: “Corbyn urges voters to deliver ‘shock to the establishment’”.

A comparison of the two front pages reveals key similarities: the masthead, the layout and the page furniture are all the same. However, the headline (including the font) and the main image are different. 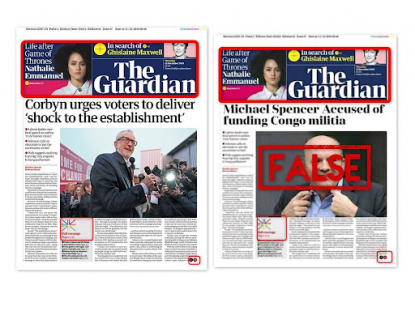 A screenshot showing similarities between the real front page of The Guardian (L) and the manipulated version, taken February 2, 2022

Additionally, The Guardian confirmed to AFP Fact Check on February 2, 2022, that neither the headline nor the picture belonged to the publication.

“The screenshot shared is not a published Guardian headline or image,” a representative at The Guardian’s press office said in an email.

Spencer is a British billionaire, politician and investor who has various assets in Kenya including an aviation company, a luxury hotel and estates along the Kenyan coast.

The headline claiming that he is “accused of financing the Congo war” was manipulated to create a damaging narrative around Ruto.

“Essentially the post is trying to build a narrative around the character of the deputy president,” Nerima Wako, a political commentator based in Nairobi, told AFP Fact Check.

Wako noted that such posts could lead to incitement ahead of the elections.

Ruto, 54, has positioned himself as a leader looking to upend the status quo by standing up for the “hustlers” trying to make ends meet. While he is yet to officially launch his bid, his main contender, former prime minister Raila Odinga, announced in December that he would make his fifth attempt for the presidency.