An ugly scene rocked a Kenya Premier League game on December 4th after a referee appeared to go down after a shove from a player.

The incident happened during a clash between Tusker FC and AFC Leopards at the Moi International Sports Center Kasarani.

What are these Tusker FC players doing to the referee? You cannot assault a referee in 2022. That is low of you.

While the details of the incident remain scanty, video footage shows the official on his knees before medical personnel rush to the pitch. He is then treated before continuing with the game.

AFC Leopards head coach Patrick Aussems was amused after the game. The Belgian could not understand how a referee could be hurt(allegedly by a player) and then fail to issue a card. It is believed that it was a Tusker player who hurt the referee.

“In any country, from U8 when a referee is kicked by a player it’s a life suspension !! Here in KPL on a professional top match, with fans the referee is kicked and beaten by players, needs 6-7′ of medical treatment to recover and the match continues 11×11 … Weird no ?”

Other reports indicate that the official was not kicked but ran into the player. Neither side nor the league has released a statement about the Sunday incident. 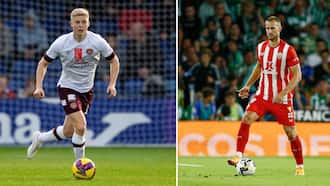 Massive brawl breaks out in friendly between Almeria and Heart of Midlothian; Video

Tusker won the game 1-0 courtesy of an Eric Mmata penalty in the second half. Leopards had the opportunity to steal a point eight minutes from time, but Ojo Olaniyi skied a penalty of his own.

The Brewers remain on top of the Premier League table after a perfect start to the season, while Leopards are in 10th place.

The current Premier League season, which started three weeks ago, will be recognized after FIFA officially lifted the Football Kenya Federation (FKF) suspension, which has been in place since February this year.

Sports letter reported that In a letter addressed to FKF’s Secretary General Barry Otieno, FIFA Secretary General Fatma Samoura expressed satisfaction that the impasse between the government and the FKF has since been resolved.