The potential economic impact of the polyphagous shot hole borer in South Africa amounts to a whopping $18.45 billion over the next ten years, and municipalities will have to bear the brunt of this cost if nothing is done to stem the tide.

The shot hole borer was first detected in South Africa in 2012 and has since spread to eight of South Africa’s nine provinces, making it the largest current outbreak of this invasive pest globally. Because most of South Africa most notorious invasive species are problematic in rural areas, this aggressive invader will have the largest impact on trees in urban areas.

This estimate is the result of a collaboration between economists at the Stellenbosch University (SU) School for Public Leadership and ecologists at the DSI-NRF Center of Excellence for Invasion Biology (CIB) at SU, SU’s Department of Conservation Ecology and Entomology and the Forestry and Agricultural Biotechnology Institute at the University of Pretoria. Instead of basing their findings on existing data, the team used a modeling approach based on forecasted impacts—thus seeking to simulate possible future impacts of this invader if nothing is done to prevent it from spreading further.

The findings were published in the Journal of Economic Entomology this week. 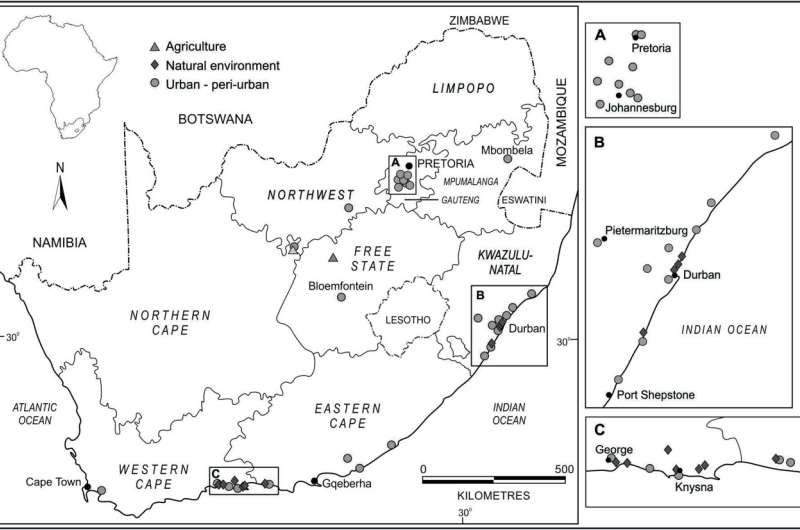 The polyphagous shot hole borer was first detected in Durban, KwaZulu-Natal, in 2012. It is believed it may have entered South Africa via a container ship. It has since spread to eight of South Africa’s nine provinces, making it the largest current outbreak of this invasive pest globally. Credit: Brian van Wilgen, Stellenbosch University

Prof Francois Roets, an ecologist in SU’s Department of Conservation Ecology and Entomology and one of the co-authors, says a tree-rich town like Stellenbosch stands to lose 20 000 of the big old oaks and plane trees lining its streets. In Somerset West, where the shot hole borer was first detected four years ago, more than 10 000 trees have already been infected and some of the oak trees are now dying.

He says urban trees are more susceptible to succumb to the beetle’s effects as these trees are usually already under stress in an urban environment compared to those in a natural forest rich with biodiversity. People in urban areas also tend to plant more non-native tree species—many of which are cloned and lack the genetic diversity necessary to fight off novel pests.

Prof Martin de Wit, an economist at SU’s School for Public Leadership and main author on the article, says that if nothing is done to prevent the further spread of this invader, municipalities country-wide will have to remove and safely dispose of an estimated 65 million urban trees between 2020 and 2030. This excludes trees on private land outside urban areas. 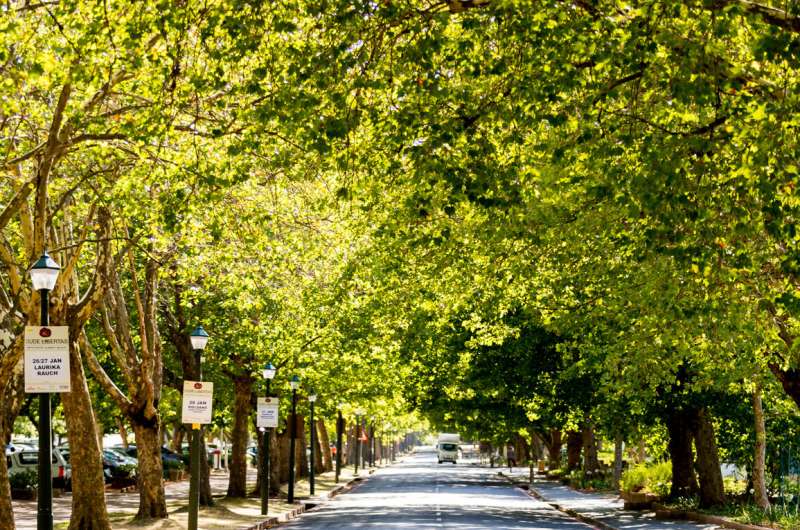 South African cities and town, such as the university town of Stellenbosch pictured here, stand to lose 65 million of its 225 million urban trees over the next decade if nothing is done to stem the spread of the polyphagous shot hole borer. Credit: Stefan Els, Stellenbosch University

Prof Brian van Wilgen, an ecologist at the CIB and co-author of the study, says the options for managing this invasion are limited: “Given how widespread it is already, eradication is impossible and management will have to focus on reducing further spread and mitigating its impacts. A first step, and likely the most economical, will be to restrict the free movement of potentially infested planting material, wood and wood products.”

The little bit of good news is that the polyphagous shot hole borer can only fly short distances—from 500 meters to two kilometers. Its rapid spread in South Africa is therefore mainly due to people moving wood across municipal and provincial borders.

The bad news is that a single virgin female can establish a new colony by producing all-male offspring and then mating with them. This “perfect invader” also carries its own food in the form of the fungus Fusarium euwallaceae, an alien species that was co-introduced with the beetle, explains Prof Roets.

Research is underway to find a biological control agent for the fungus Fusarium euwallaceae and the beetle. However, “it would take at least a decade before the agent [if one can be found] could be released, and even longer before any significant reduction in spread could be expected,” the authors write in the article. 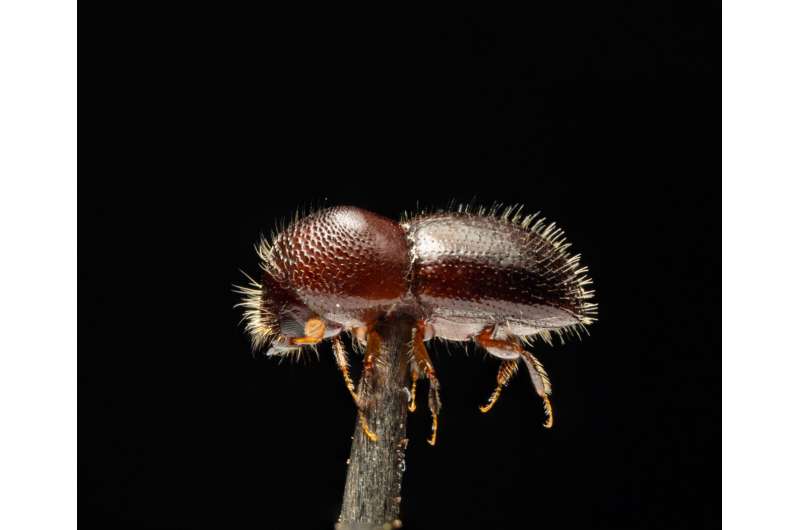 The small size and light to dark brown color of the polyphagous shot hole borer makes it difficult to detect. Females are 1.8-2.5 mm long while males are only 1.5-1.67 mm long. Credit: Garyn Townsend

To date, there is no thoroughly tested and approved insecticide or fungicide registered in South Africa to treat infestations of the shot hole borer effectively, at least not for urban trees. “Anyone who tells you they will save your tree with chemicals and fungicides is likely lying and will be breaking the law,” warns Prof Roets.

“A coordinated strategy to deal with the invasion in South Africa will require a revision of legislation and the creation of policies relating to biological invasions. Currently, there is no coordinated management of invasive species in urban ecosystems, a critical oversight,” the authors conclude .

This document is subject to copyright. Apart from any fair dealing for the purpose of private study or research, no part may be reproduced without the written permission. The content is provided for information purposes only.