Bus operators plying the Western Kenya route have registered full bookings ahead of August 9 General Election in what could be termed as an election fever.

A spot check by Kenyans.co.ke established that bus operators have been fully booked and will only do evening trips from August 7.

“We have witnessed an uptick in the bookings starting July 25 to August 7, a case most likened to election fever,” a Customer Service Head for a bus operator based in Busia county told Kenyans.co.ke.

Matatu drop-off stage at GPO along Kenyatta Avenue in Nairobi.

The exodus coincides with the schools’ August holidays and anxiety over elections uncertainty.

At the country bus station, bus operators say they may be forced to hike the bus fare a week to election owing to the high number of travellers.

For some travellers, however, jitters over the possibility of violence erupting after the polls was enough to send them back to their rural areas.

“I have put my wife and a child on a Busia bound-bus because of election fever. I will call them back if and when the situation would deem fit for them to return,” said Collins Ogutu, a Nairobi resident.

According to Ogutu, he was keen to avoid getting caught up in the last minute rush for buses heading to Busia, coupled with a burdened uptick in bus fare.

Some buses are charging Ksh1,500 to ferry passengers to Busia, Kisumu, Kakamega and Mumias from Nairobi, which is an increase from the conventional Ksh1,000.

The exodus is likely to affect presidential and gubernatorial candidates who are banking on the 2.2 million registered voters in the city to ascend to power.

The Raila Odinga-led Azimio la Umoja One Kenya Coalition Party is the most popular coalition in Nairobi, with a 49 per cent rating, according to the Trends and Insights for Africa (TIFA) poll.

It is closely followed by Deputy President William Ruto’s Kenya Kwanza coalition whose support is at 25 per cent.

In the widespread ethnic violence that followed the 2007 elections, the counties of Nakuru and Nairobi are among areas which were hard hit.

Historically, politics in Kenya is largely ethnically driven, with voters rallying behind candidates from their ethnic groups.

Kenya’s Catholic bishops urged politicians to pursue peace and refrain from inflammatory statements that “incite hatred” and desist from “drumming up tribal and ethnic sentiments”. 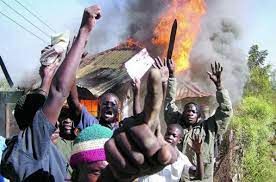 Kenyans protesting during the post-election violence.